A few days ago I finished reading Rule 34, which reminded me once again that I should probably read Charlie Stross’s blog more regularly. But of course, I did nothing about this because I’m a lazy sod and I had other things on my mind. Now Brad DeLong reminds me again, by linking to Stross, who in turn links to John Brownlee, who is obsessed these days with an iPhone app called Girls Around Me. Why? Because it demonstrates just how much privacy we’ve given up, either voluntarily 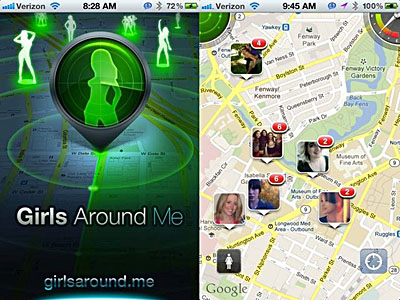 or accidentally, in the era of Facebook and social networking:

“Okay, so here’s the way the app works,” I explained to my friends.

Girls Around Me is a standard geolocation based maps app, similar to any other app that attempts to alert you to things of interest in your immediate vicinity: whether it be parties, clubs, deals, or what have you. When you load it up, the first thing Girls Around Me does is figure out where you are and load up a Google Map centered around your location….It’s when you push the radar button that Girls Around Me does what it says on the tin. I pressed the button for my friends. Immediately, Girls Around Me went into radar mode, and after just a few seconds, the map around us was filled with pictures of girls who were in the neighborhood. Since I was showing off the app on a Saturday night, there were dozens of girls out on the town in our local area.

….“How does it know where these girls are? Do you know all these girls? Is it plucking data from your address book or something?” another friend asked.

“Not at all. These are all girls with publicly visible Facebook profiles who have checked into these locations recently using Foursquare….The pictures you are seeing are their social network profile pictures.”

“Okay, so they know that their data can be used like this for anyone to see? They’re okay with it? ”

“Probably not, actually. The settings determining how visible your Facebook and Foursquare data is are complicated, and tend to be meaningless to people who don’t really understand issues about privacy,” I explained. “Most privacy settings on social networks default to share everything with everyone, and since most people never change those… well, they end up getting sucked up into apps like this.”

….One of my less computer-affable friends actually went pale, and kept on shooting her boyfriend looks for assurance. A Linux aficionado who was the only person in our group without a Facebook account (and one of the few people I’d ever met who actually endorsed Diaspora), the look he returned was one of comical smugness.

“But wait! It gets worse!” I said, ramping things up.

Click the link to see how it gets worse. And then click on Charlie’s blog post to find out what it all means. Then, when you’re done, for God’s sake, take some time to go into your Facebook profile and make sure you’re not sharing anything more than you really want to. It’s not as easy to do this as it should be, but the good news is that it’s at least a little easier than it used to be. So go do it.

UPDATE: ProPublica reporter Jake Bernstein tweets that this app no longer works. Good news! But there will be many, many more just like it, so go update your Facebook profile anyway.