The Supreme Court will be voting today in the Obamacare case (though we won’t hear the results until June or so). One possible outcome is that they’ll buy into the argument of the critics that Congress can regulate activity but not inactivity (i.e., it can’t penalize you for failing to buy health insurance), and therefore strike down some or all of the law as unconstitutional. This distinction between activity and inactivity would be an example of 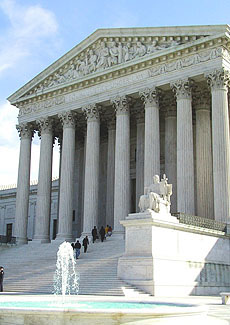 a “limiting principle” — that is, some rule that explains what Congress is allowed to do and what it’s not. Conservatives have long said that this is something the court will demand, since they aren’t willing to give Congress unfettered power to do anything it wants based solely on the interstate commerce clause of the Constitution. In oral arguments, the government never really articulated an alternative principle, but a few days ago I asked why that should be the government’s job in the first place. Isn’t that the court’s job?

And this, I think, is where there’s cause for hope. Overturning Obamacare would be a very, very big deal for the court. There’s good reason to think that Roberts and Kennedy in particular would be reluctant to overturn a major domestic program in an area that’s indisputably political and legislative in nature, and they’d be especially reluctant to do that based on a logic-chopping decision that amounts to a technicality. They know perfectly well that Congress could have quite easily implemented the individual mandate in a way that’s unquestionably constitutional, and the only reason they didn’t was because no one had the slightest fear that the court would overturn the existing version. It just wasn’t an issue.

So what will the court do? If they don’t want a rerun of the 1930s, which did a lot of damage to the court’s prestige, but they do want to put firmer limits on Congress’s interstate commerce power, the answer is: find a limiting principle of their own. But find one that puts Obamacare just barely on the constitutional side of their new principle. This would avoid a firestorm of criticism about the court’s legitimacy — that they’re acting as legislators instead of judges — but it would satisfy their urge to hand down a landmark decision that puts firm limits on further expansion of congressional power. Liberals would be so relieved that Obamacare survived that they’d probably accept the new rules without too much fuss, and conservatives, though disappointed, would be thrilled at the idea that the court had finally set down clear limits on Congress’s interstate commerce power.

I have no idea what the justices are actually thinking, of course. Hell, maybe the court’s conservatives are ready for a revolution and don’t care what the mob thinks of them anymore. But a new rule that reined in Congress without overturning Obamacare just might be a compromise that the liberal wing of the court could push through, especially if they made it clear they were willing to sign on themselves in order to give it bipartisan legitimacy. I guess we’ll know in a few months.