Is misogyny worse than it used to be? Kathleen Geier thinks so:

One way in which things are much, much worse for women these days than 20 years ago is the sheer amount of virulent misogyny that is openly expressed, and tolerated, in our society. It feels to me that, in many ways, our culture is much more openly sexist now that it was then. Rush Limbaugh’s comments about Sandra Fluke are only the most recent and notorious example of this new misogyny. You see it online; women bloggers, for example, report they are frequently the target of vicious verbal abuse, up to and including rape threats and death threats. Female political leaders of both parties are held to a double standard and subjected to much humiliatingly sexist treatment. Many movies and TV shows, and reality shows especially, traffic in extremely sexist stereotypes; TV commercials sometimes seem to go out their way to be offensive to 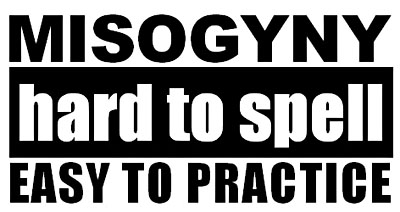 women. Tabloids obsessively police the bodies of female celebrities and cruelly ridicule any famous woman who dares to go out in public looking less than perfect.

….When I was growing up, there was certainly a lot of sexism in television shows, but misogyny is something different. Sexism was Archie Bunker calling his wife Edith a dingbat; annoying and insulting, certainly; sexist, definitely; but not violent or hateful. An example of misogyny is, for example, the way the character of the daughter, Meg, is portrayed in the popular cartoon sitcom, The Family Guy. Meg is frequently the subject of rape “jokes” and cruel jibes about her supposed ugliness; a frequent theme is that she is worthless and beneath contempt because she is not “hot.”

I’m too disengaged from popular culture to have a strong opinion about this. I don’t watch much TV and I almost never read blog comments. I see enough references elsewhere to these things to believe that Kathleen is probably right, though. But why?

The internet allows many people to be extremely nasty anonymously, with impunity — that’s certainly part of it. Pop culture has become more vulgar, and porn has become more widely available, and thus more influential, I think. The proliferation of everything from home video to cell phone cameras to the internet has caused us to become a more visual culture, which partly explains why women today are judged much more harshly on the basis of their looks. We’ve become a much more conservative country, politically, and the Christian right, which is explicitly anti-feminist, has become more powerful. But that can’t be the whole thing.

At a guess, another part of the reason is that a lot of misogyny that was more-or-less private a couple of decades ago is now more-or-less public. We might not be more misogynistic than we used to be, but our misogyny is a whole lot more public than it used to be. That makes it seem like there’s more of it. In reality, we’re just being forced to confront the fact that there’s always been, and still is, a helluva strong misogynistic streak in American culture.

But it’s disgusting regardless of whether there’s a real upswing or simply more media channels to make it public. I do think there’s some occasional carelessness here, where mere nastiness toward a female target is mistaken for real misogyny, but that’s a minor thing. There’s too much of it, and if lefties won’t call it out when they see it, who will? Examples in comments, please.