Did the Iranians release their American hostages on the day of Ronald Reagan’s inaugural because they were scared shitless of what the Gipper would do to them if they held out? In a word, no. Probably just the opposite. They weren’t especially afraid of Reagan, but 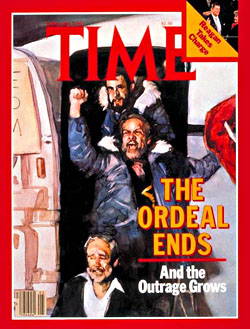 they were pissed off at Jimmy Carter and wanted to deny him the satisfaction of being able to announce the hostages’ release. What’s more, by 1981 Iran was in a war with Iraq and really, really needed the money that had been frozen while the hostages were being held.

But not everyone is aware of all this, and James Joyner argues that this includes people running for president:

It’s rather unreasonable to expect our presidential candidates to consult with teams of historians to get their post hoc, studied reactions to events. Those who have studied the negotiations since — and presumably had the ability to talk to some on the Iranian side — have since concluded that there’s little to no evidence that the incoming president’s foreign policy was a significant factor. But there’s no reason on earth Romney should know that.

Well, sure, I’ll go along with that. We can’t expect presidential candidates to know everything.

But here’s the thing: if you don’t know about this history, you probably shouldn’t write op-eds in the Washington Post about it. Or if you do, you should spend a minute or two on the internet checking things out. That would keep you from writing nonsense like this:

Beginning Nov. 4, 1979 , dozens of U.S. diplomats were held hostage by Iranian Islamic revolutionaries for 444 days while America’s feckless president, Jimmy Carter, fretted in the White House. Running for the presidency against Carter the next year, Ronald Reagan made it crystal clear that the Iranians would pay a very stiff price for continuing their criminal behavior. On Jan. 20, 1981, in the hour that Reagan was sworn into office, Iran released the hostages. The Iranians well understood that Reagan was serious about turning words into action in a way that Jimmy Carter never was.

What twaddle. If Romney is clueless about this episode in American history, fine. He’s had other things on his mind for the past 30 years. But if he doesn’t know anything, he shouldn’t be mouthing off about it either. Deal?