Do presidents really have the power to persuade? Citing the work of political scientists George Edward and Frances Lee, Ezra Klein writes in the New Yorker this week that they don’t. Not much, anyway. When presidents talk, he argues, all they really do is polarize: instead 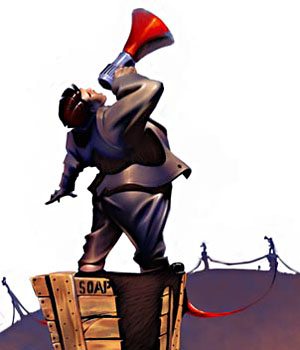 of persuading, they simply make partisan divides even starker. So if you didn’t have much of an opinion about contraceptive coverage a month ago, you probably do now — and thanks to President Obama’s intervention, you’re now for it if you’re a Democrat and against it if you’re a Republican:

….The question, [Paul] Begala says, is: What is the alternative to Presidential persuasion? “If you don’t try it at all, it guarantees you won’t persuade anybody,” he says. “And, to put it simply, your people in Congress and in the country will hate you if you don’t.” That’s the real dilemma for the modern White House. Aggressive, public leadership is typically ineffective and, during periods of divided government, can actually make matters worse. But passivity is even more dangerous. In that case, you’re not getting anything done and you look like you’re not even trying.

The entire essay is worth a read. It’s surprisingly persuasive. And yet, that bolded passage makes a key point: even if presidential speeches don’t accomplish much, we really don’t know if shutting up would be any better. After all, we’ve never had a modern president who specialized in shutting up. And since it’s not a trait likely to lead to the Oval Office, we probably never will.

I also think that Ezra doesn’t really grapple with the strongest arguments on the other side. For one thing, although there are examples of presidential offensives that failed (George Bush on Social Security privatization), there are also example of presidential offensives that succeeded (George Bush on going to war with Iraq). The same is true for broader themes. For example, Edwards found that “surveys of public opinion have found that support for regulatory programs and spending on health care, welfare, urban problems, education, environmental protection and aid to minorities increased rather than decreased during Reagan’s tenure.” OK. But what about the notion that tax cuts are good for the economy? The public may have already been primed to believe this by the tax revolts of the late ’70s, but I’ll bet Reagan did a lot to cement public opinion on the subject. And the Republican tax jihad has been one of the most influential political movements of the past three decades.

More generally, I think it’s a mistake to focus narrowly on presidential speeches about specific pieces of legislation. Maybe those really don’t do any good. But presidents do have the ability to rally their own troops, and that matters. That’s largely what Obama has done in the contraception debate. Presidents also have the ability to set agendas. Nobody was talking about invading Iraq until George Bush revved up his marketing campaign in 2002, and after that it suddenly seemed like the most natural thing in the world to a lot of people.

Beyond that, it’s too cramped to think of the bully pulpit as just the president, just giving a few speeches. It’s more than that. It’s a president mobilizing his party and his supporters and doing it over the course of years. That’s harder to measure, and I can’t prove that presidents have as much influence there as I think they do. But I confess that I think they do. Truman made containment national policy for 40 years, JFK made the moon program a bipartisan national aspiration, Nixon made working-class resentment the driving spirit of the Republican Party, Reagan channeled the rising tide of the Christian right and turned that resentment into the modern-day culture wars, and George Bush forged a bipartisan consensus that the threat of terrorism justifies nearly any defense. It’s true that in all of these cases presidents were working with public opinion, not against it, but I think it’s also true that different presidents might have shaped different consensuses.

Maybe I’m protesting too much. I actually think Ezra has the better of the argument here. But even if public opinion can rarely be directly challenged and turned around, it can be molded and channeled. Presidents and their party machines can influence which latent issues stay dormant and which ones become national obsessions. They can take advantage of events in ways that others can’t. After all, talking is what human beings do. It’s hard to credit the idea that it never really accomplishes anything.