Jon Chait comments on recent polling showing that residents of Alabama and Mississippi mostly don’t believe that Barack Obama is a Christian:

My good friend Michelle Cottle, a southern expatriate, took umbrage that this was “cultural profiling.” Okay, but why are these states the first ones we’ve seen that have sullen convicts in garish prisoner stripes hauling around ballot boxes? We have been able to follow primary voting in many other parts of the country without wondering if we had dropped in on a scene from Cool Hand Luke. A flustered Wolf Blitzer, taking 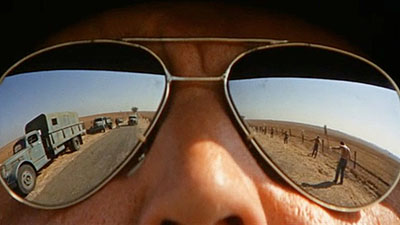 in the scene, commented awkwardly, “they’ve been asked — they’ve been told, actually” to haul ballot boxes. What we have here is a failure to communicate.

And speaking of a failure to communicate, the Republican war on TelePrompTers has poetically backfired. It began as a quasi-racist meme among the fever swamps of the right, a way for right-wingers to express their belief that Obama is a brainless talking doll. By catering to it, Republicans backed themselves into a position where they can’t use TelePrompTers at all. The result is a series of rambling election night speeches that manage to be at once frightening and dull. The speeches, like the race, just go on and on and on.

Do all those terrible election night speeches really suck because the candidates are refusing to use teleprompters? I thought it was just because each one of the remaining Republican candidates is either awkward or snarling or self-righteous or some combination of all three. But here’s what I really want to know: what’s the legal truth of the whole TelePrompTer vs. teleprompter thing? If I use it without all the weird capitalization, will some Madison Avenue lawyer send me a nasty letter demanding a correction? According to Wikipedia:

The word teleprompter, with no capitalization, had become a genericized trademark, because it is used to refer to similar systems manufactured by many different companies. The United States Patent Office does not have any live trademarks registered for the word “teleprompter”, but this does not rule out the possibility of a company enforcing the trademark without registering it.

Hmmm. The actual TelePrompTer Corporation sold its prompting business in the early 60s and got into the cable TV business. The corporation was later sold to Westinghouse, then to the New York Times, and finally to Bright House Networks. So if there’s any trademark here at all, presumably it’s owned by Bright House, which isn’t in the prompter business and couldn’t care less if I capitalize the name.

So why do so many people keep doing it?