In the Wall Street Journal a few days ago, Allan Meltzer hauled out the chart below, which shows that income shares of the rich have been rising all over the world for the past 30 years. His conclusion: if income inequality is changing everywhere, “that means domestic policy can’t be the principal reason for the current spread between high earners and others.”

Really? Here’s the chart, based on data from Jesper Roine and Daniel Waldenström: 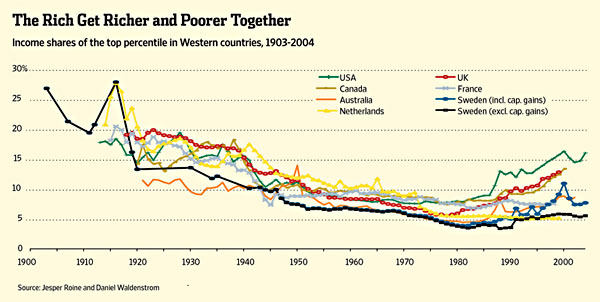 I’ll make the obvious point first: there are some mighty big differences here. According to Roine and Waldenström, the income share of the top 1% in 2004 (their most recent data) clocked in at about 17% in the United States. It was 9% in Australia, 8% in France and Sweden, and 5% in the Netherlands. Only the other English-speaking countries, Canada and the UK, were near U.S. levels.

So although domestic policies certainly aren’t the whole explanation for the exploding income of the rich — and nobody has ever claimed they are — the evidence certainly suggests they play a significant role. There’s a big difference between 8% and 17%.

But Bruce Bartlett makes another point:

[Meltzer] seems to have missed an important implication of his own conclusion. If the rich are going to continue to get richer in low-tax countries and high-tax countries alike, then it must mean that high tax rates have far less of a disincentive effect on the rich than conservatives like Professor Meltzer continually proclaim.

He asserts that we should not raise tax rates on the wealthy, as President Obama has proposed, because it won’t do anything to reduce the share of income going to the ultrawealthy and thereby equalize the distribution of income. For the sake of argument, I will concede the point. But there is another very good reason to raise taxes on the ultrawealthy: the government needs the revenue.

Right. As it happens, I don’t think tax policy is a great instrument for wealth redistribution. There are probably better ways to make society more egalitarian. On the other hand, tax policy is a great instrument for raising money that can be spent on programs that make society fairer and more decent — like universal healthcare, for example. And since (a) the evidence suggests that high-but-not-punitive tax rates have little effect on economic growth, and (b) growing income inequality means that the rich have ever more money, then it makes sense to tax the rich at higher rates. They’re the ones benefiting from economic growth, they’re the ones with the money, and they’re the ones who can best afford it. If your income share doubles over the course of 30 years, it only makes sense that your tax rates ought to go up, not down.