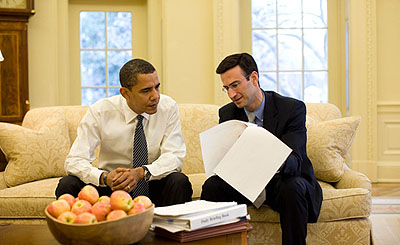 In the fall of 2009, Obama’s chief congressional lobbyist, Phil Schiliro, touted a clever idea for dealing with the tax cuts: introduce a bill that would extend the middle-class cuts for two years while allowing the upper-income portions to expire. After two years, the middle-class cuts would also expire unless Congress paid for them with off-setting savings or tax increases.

Schiliro figured that, if the bill passed, the whole mess of tax cuts was likely to disappear when all was said and done….At first, Schiliro’s plan went nowhere—in truth it was as much a stunt as a serious proposal. But Schiliro had an important ally: Peter Orszag, the president’s budget director….By November 2009, Orszag had become so fond of the idea that he insisted on presenting it to the president in the Oval Office. Orszag’s fellow wonks were cool to the plan, having heard him and Schiliro sing its praises repeatedly. But the administration’s chief wonk—Barack Obama—was intrigued.

I would be delighted if this were true, but this reporting seems really, really thin to me. I mean, what’s the evidence here? In a single meeting over a year ago, budget hawk Peter Orszag presented an idea and Obama….listened. That’s it. Scheiber says Obama was “intrigued,” but the plan never went anywhere, and Orszag, of course, is no longer part of the administration. It’s never come up again, and Obama has apparently never so much as mentioned it since November 2009.

“What is clear,” says Scheiber, “is that, having been tempted to end all of the Bush tax cuts in 2009, the president would only find the idea more attractive were he to win a second term.” But no: that’s not clear at all. Obama wouldn’t have to worry about reelection, but every single Democratic member of Congress still would, so the political calculus really wouldn’t change much at all.

This is making a mountain out of a molehill. Staffers have ideas all the time. Sometimes they get a chance to present them to the president. The president usually listens politely, rather than screaming at them never to mention it again. That’s all that seems to have happened here.

Which is too bad. Ditching the entire set of Bush tax cuts really is the only way we’ll ever get the long-term deficit under control. If I had my way, we’d phase out the whole mess, maybe by thirds starting in 2013. But I’ll bet the president doesn’t agree, more’s the pity.