I want to thank Kevin for the opportunity to post here, and to answer some questions that naturally arise in discussions of my new book, The Republican Brain. Kevin poses a number of them, and poses them well—I have a lot of critics who get the argument completely wrong, so this is a breath of fresh air.

At the outset, I want to clear the air about a few things, where confusion seems too often to prevail. I deal with these nuances in depth in the book, but it will help to restate them here more briefly:

Psychological Needs Do Not Have Substantive Content. This is something I discussed earlier this week in a piece at Salon.com, with respect to the role of authoritarianism in conservatives’ distrust in science.

When you talk about the psychological, physiological, or biological underpinnings of political views, you have to understand that such dispositions are inherently content free. They clearly “push” individuals towards accepting certain views and certain arguments that feel right to them—thus, a person highly sensitive to fear threat may be less likely to worry about civil liberties in the wake of 9/11, or to naturally feel support for the death penalty. But the precise views that feel appealing to such a person would also be very different in the U.S. at the present moment than they would be in, say, China. And they would also change over time in the U.S. itself.

This is something that we must always bear in mind; and therefore, when I talk about a political phenomenon like U.S. conservatives denying science or fact, you are inevitably talking about a mélange 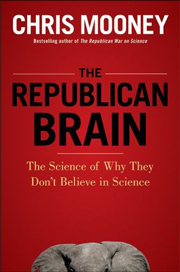 of underlying psychology—which appears to have some universal human elements to it—and the specifics of our unique political culture and discourse.

Nevertheless, certain psychological traits or needs do match up well with certain ideologies, on average. The research shows this repeatedly.

We Are Pre-Disposed To Have Certain “Political” Traits; But That Doesn’t Make Them Destiny. There is also a confusion about the issue of, essentially, determinism. I’m saying that our political views are partly the product of “nature,” and then showing the role of psychology, physiology, and even some genetic influences. However, none of this stuff is deterministic; and the account is not reductionist. Even when it comes to genes, which do seem to influence our political views, the influence is indirect, statistical, and there is a feedback with the “environment” at every single step of the way.

When Kevin uses the word “innate” in his piece, which he does repeatedly, I worry that he may not be crediting this complex reality. Other people use phrases like “genetically wired” or “hardwired,” which are flatly wrong.

With all that in mind, then, let’s go on to answer Kevin’s questions. He says he has three reasons for being skeptical of my argument. In particular, he isn’t convinced that conservatives naturally tend towards being anti-science.

1. Just a Few Issues? First: Kevin notes that conservatives only really bash science today on two issues, evolution and climate change. I agree that these are the two leading issues of the moment, but doesn’t Kevin remember stem cell research? It was quite prominent up until recently, and in the 2004 election it led the pack of science issues. And doesn’t contraception count as a science issue? In my book I detail numerous cases of conservatives denying science whenever it has something to do with reproductive health, contraception, or abortion.

And for that matter, who said it was just science we’re talking about? I deliberately subtitled the book “The Science of Why They Deny Science—and Reality” so as to include belief that President Obama is a Muslim, or a socialist, or wasn’t born in the United States; the huge array of false claims about health care reform and the economy; falsehoods about American history, and much else.

Precisely because we are talking about something that is partly dispositional about conservatives, there is no reason to think that their denial of reality would begin and end with science issues. Rather, there is every reason to think that this behavior—springing in part, I argue, from psychological traits like more rigidity or fixity of views, less openness to new information, more authoritarianism, and so on—would infect all areas where they had an emotional stake.

So when Kevin says “I really don’t think you need the sledgehammer of innate cognitive traits to explain” conservatives denying science on evolution and climate change—well, the picture is much broader than those two issues. And again, I’m wary of that word “innate.”

2. Too Many Steps? That’s Kevin’s first objection; to answer his second, I need to hearken back to my “Psychological Needs Do Not Have Substantive Content” point.

Kevin asks, “What’s the cognitive trait that makes you anti-science? Not just skeptical of one or two particular results, but skeptical of science in general.” Well, there’s no such trait—because, again, these traits are content free, and Kevin is using the word “science” in a way that denotes content (a body of knowledge, a methodology, and so on).

It’s totally possible that science could be framed in a way that an authoritarian conservative would support. Maybe that was what occurred under Stalin, when the Soviet regime touted the anti-genetic pseudoscience of Lysenko. However, it isn’t very likely that, in a democracy like ours, science and basic conservative traits are going to get along very well, for very long. They are, as I explain in Salon, “just such deeply opposed ways of thinking—and being. You could argue that the clash between science and authoritarianism dates all the way back to the time of Galileo, if not farther.”

The point is that science and liberalism alike are rooted in a style of thinking that is nuanced, complex, tolerant of uncertainty. These characteristics don’t mesh so well with the body of traits—quick-thinking, decisiveness, less openness to experience—that tend to go along with conservatism. So while in certain contexts you might find allegiances, there is a deep seated tension there that, in the long run, would tend to push them apart.

3. Liberals Do It Too. There’s no denying that liberals have their own occasional issues with science. But do they have the same issues, or the same kinds of issues, and do they deal with them in the same way? I don’t think so.

Kevin cites the “science wars,” noting that they emerged from the academic left. Yes, but what a classically liberal way of challenging science, replete with incomprehensible jargon (“deconstruction”), layer upon layer of nuance and complexity, and more than a whiff of “hey, over here” attention seeking.

The “science wars” were liberal in another way, too—faddish. Temporary. Fleeting. They didn’t last, we moved on to other things. Meanwhile, conservatives are going on a century of active anti-evolutionism in the United States, and climate change denial is now also decades old.

Similarly, I don’t think liberals are nearly as opposed to “sociobiology” or “evolutionary psychology” as they once were, because again, liberals change and shift their views more easily. I, as a liberal, find such explanations essential.

Kevin concludes with a series of statements I utterly agree with, at least up to the end:

There’s a complex interplay of biology and culture that produces liberals and conservatives in the first place. But once a conservative movement is in place, it’s inevitable that it will attack conclusions it doesn’t like and institutions that aren’t on board with the conservative agenda. That includes the institutions of science to some extent and a few specific scientific results to a very large extent. But that’s just common sense. I don’t think you need evolutionary psychology to explain it.

I would put it a little differently. It’s not really that you need these factors to give an explanation; people give the sorts of explanations featured here all the time. Rather, it’s that you can’t ignore dispositional or psychological factors any longer if you want to truly understand politics. You have to start to see beneath the surface.

All the studies discussed in my book show that these factors are having a substantial effect on political views and behavior. The burden of proof is really on those who would continue to discount them.