In an otherwise tedious case about milk regulation, Appellate Judge Janice Rogers Brown decided to give her inner Randian free rein last week. “Cowboy capitalism” is dead, she moaned, and courts are at fault for not 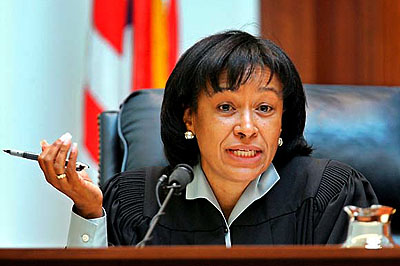 slapping down legislatures both local and national that infringe on economic rights. It was a pretty remarkable performance, all the more so since it really had nothing to do with the case at hand. So what gives? I think Dahlia Lithwick gets it right here:

There’s one other point worth making, before we leave Judge Brown to her open-mic libertarian musings. She is, beyond any doubt, apt to appear on any short list for Mitt Romney’s choice to replace any of the four Supreme Court Justices who are currently in their 70s, some of whom will be 80 by the 2016 elections. In that light, this concurrence looks less like a judicial opinion than a job application.

I have written before how ironic it is that a liberal jurist can be disqualified from a judicial confirmation hearing for expressing a single progressive idea in a law review article, whereas when it comes to conservative judicial nominees extreme and full-throated ideological exhortations are usually an added bonus. For Brown, the choice to write an opinion eviscerating New Deal worker and health protections at precisely the moment these issues are burning up cable television and Tea Party rallies is just smart politics. It’s hard to imagine a liberal shortlister attempting the same and surviving a Supreme Court confirmation bid. Or a confirmation bid of any sort, really.

Yep. Both Sonia Sotomayor and Elena Kagan had to practically disavow any settled opinions on anything, and even so got plenty of rabid opposition from gun groups, abortion groups, and other right-wing groups convinced they saw a glimmer of a shadow of a penumbra of liberal thought in some choice of words a dozen years ago or an ambiguous decision handed down that touched on some hot button issue. But Brown? She just lets it rip. Apparently she’s not worried that it will hurt her at all with a future President Romney.

I have a feeling this might become a trend. Conservative judges have been feeling less and less restraint over the past few years about expressing their small-government bona fides, and the recent oral arguments over Obamacare were a kind of high court permission to let politics roam freely in judicial proceedings. I suspect a lot more lower court judges are going to take advantage of that.

UPDATE: I’ve gotten some pushback on this from various quarters, most of it fair. First, everyone in comments is right that Brown is 62, much too old to be a serious contender for a Supreme Court appointment these days. Second, she was kinda sorta under consideration for the Supreme Court in 2005, but was considered too outspoken to get the job. Third, liberal judges have made similar comments in the past — though I think these comments haven’t been quite as broad or radical as Rogers’.

So, yeah, most likely Brown knows she’s too old for a promotion, which means she’s free to say whatever she damn well pleases. That’s not necessarily praiseworthy, but it’s probably not a job application either.