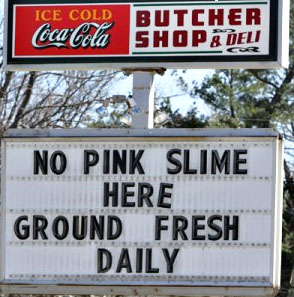 I’ve studiously ignored the pink slime controversy, but now that the whole thing is pretty much over and the slime industry seems to be close to collective bankruptcy, Brad Plumer brings us news that maybe it was all a big mistake. After all, the pink slime processors recover an extra ten pounds of edible beef from each cow, which means we need fewer cows to feed us all. And fewer cows means less global warming:

If those numbers are correct — and, fair warning, they do come straight from the beef industry — then a ban on pink slime would, potentially, require the slaughter of another 1.5 million cows to meet the nation’s beef needs. And, because cows are a major source of heat-trapping methane, that can have a serious global-warming impact.

Wait a second. I don’t really have an axe to grind here, since pink slime doesn’t disgust me much despite everyone’s best efforts to activate my gag reflex over the past few weeks. It’s a mere drop in the vast ocean of crap that I shovel into my body daily. Still, pink slime only cuts down on carbon if it would otherwise get thown out. But it doesn’t, does it? If it doesn’t get added to your Big Mac, it will just go back to being used in pet food and cooking oil. I assume that’s less lucrative for the cattle industry — though I’m not sure why since cat food costs about as much per ounce as ground beef — but the effect on global warming is zero. One way or another, the stuff is all going to get used.

Or am I off base on this somehow?

UPDATE: Generally speaking, pink slime probably represents a higher value use of the raw ingredients than, say, oil or cat food. And if the industry can squeeze more value out of its cows, that will probably increase demand for cows. I can buy that. However, it’s a second order effect and depends very sensitively on actual industry practices and consumer preferences. More data needed! However, if I had to guess, I’d say that the effect of pink slime on overall cow production is fairly small, not the 1.5 million that the industry estimates via simple arithmetic.

UPDATE 2: I am now going to embarrass myself by playing amateur economist. What follows might be totally off base, so real economists are welcome to scoff and tell me what I’ve done wrong. Here goes:

So here’s what we get:

If this is close to right, it means that banning pink slime really does have an effect, but it’s maybe a third of what the industry claims. Feel free to contest this conclusion in comments. As always, there are a bunch of additional second and third-order effects, so modeling this with any real precision is very, very hard.