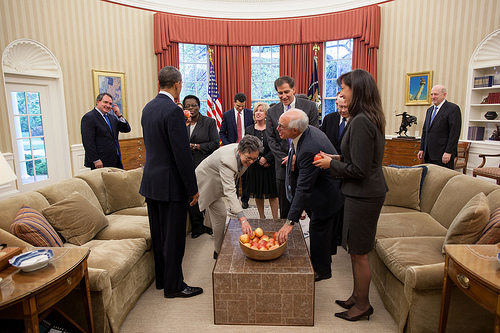 As you can see from this picture of Obama and several advisers in the Oval Office, white people can't get a break in Obama's America. <a href="http://www.flickr.com/photos/whitehouse/7161178860/sizes/m/in/photostream/" target="_blank">Flickr/White House</a>

Buzzfeed’s McKay* Coppins published a story on Sunday about the Obama-inspired race war being waged against whites by legions of uppity Negroes. In paragraph 23, Coppins explains it’s all a myth:

Indeed, the irony of the race war narrative’s latest flare-up is that it comes at a time when national crime rates have reached historic lows — including reported hate crimes against whites. According to a report released by the FBI, there were 575 anti-white bias crimes reported in 2010 — up slightly from the 545 reported in 2009, but distinctly lower than the 716 reported in 2008. Overall, the past decade has seen a downward trend in anti-white bias crime. What’s more, hate crimes against blacks have continued to outstrip those against whites by about four-to-one: In 2010 alone, there were 2,201 reported. Violent crimes across the spectrum reached a four-decade low in 2010.

As Coppins writes, the conservative “race war” narrative is largely about flooding the zone with stories of white persecution in order to blunt liberals’ charges of racism, which conservatives believe are unfair. That strategy, in and of itself, reflects the conservative view that racism against minorities is largely nonexistent; that disparities in wealth, employment, and education are simply manifestations of self-perpetuating discrepancies in human capital; and that the only reason anyone ever brings up race or racism is as a political weapon. Moreover, the notion that explicit racial violence is the only accurate barometer for bigotry ignores the uncountable ways institutional prejudice can sustain itself without explicit violence. Even if hate crimes in 2010 were slightly higher in 2008 instead of being lower, that wouldn’t alter the fact that more young black men were “randomly” stopped and frisked in New York City than there are young black men in New York City.

The more disturbing implications of the newfound conservative focus on “black-on-white violence” is the idea that allowing black people to rise to positions of authority places white people in physical danger. Or as Rush Limbaugh so concisely put it, “[I]n Obama’s America, the white kids now get beat up with the black kids cheering.” (We can assume an exception for allowing Republican African-Americans to rise to positions of power. As Ann Coulter put it, “Our blacks are so much better than their blacks.”)

The conservative race war argument—that if “those people” get something, you’re going to lose, or perhaps even get beaten up—is well-suited for a world of budget cuts and public-sector layoffs. The smaller the pie, the more hostile people get to the idea of sharing, particularly with those who are “undeserving.” It also helps explain why some people might have thought that now-disavowed ad tying Barack Obama to Jeremiah Wright was a good idea. If you’re working back from a predetermined conclusion that the Obama agenda is the product of anti-white racism, you’re primed for the ad’s explanation that Wright is responsible for a still-sluggish economy.