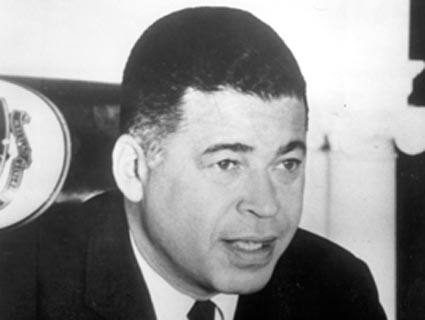 I can’t recommend enough Jonathan Chait’s rebuttal to National Review‘s attempt to rewrite the history of the civil rights movement to portray conservatives as its most ardent supporters:

It is true that most Republicans in 1964 held vastly more liberal positions on civil rights than Goldwater. This strikes [Kevin Williamson, the author of the National Review piece] as proof of the idiosyncratic and isolated quality of Goldwater’s civil rights stance. What it actually shows is that conservatives had not yet gained control of the Republican Party.

But conservative Republicans — those represented politically by Goldwater, and intellectually by William F. Buckley and National Review — did oppose the civil rights movement. Buckley wrote frankly about his endorsement of white supremacy: “the White community in the South is entitled to take such measures as are necessary to prevail, politically and culturally, in areas in which it does not predominate numerically.” More often conservatives argued on grounds of states’ rights, or freedom of property, or that civil rights leaders were annoying hypocrites, or that they had undermined respect for the law.

What Chait doesn’t say is that Buckley’s editorial wasn’t just an endorsement of white supremacy, it was an endorsement of vigilante violence, tacitly if not explicitly supported by local authorities, in pursuit of enforcing white supremacy. Elsewhere in the piece, Buckley writes, “sometimes the numberical minority [whites] cannot prevail except by violence: then it must determine whether the prevalence of its will is worth the terrible price of violence.” As long as it’s up to them.

Amazingly, nowhere in Kevin Williamson’s piece does he attempt to reckon with this piece of National Review‘s legacy, even as he puts forth a revisionist history of the civil rights movement in which conservatives are its most ardent supporters. Buckley, and his declaration of solidarity with Southern white supremacy, is entirely unmentioned. Instead, Williamson adopts the usual sleight of hand Republicans deploy here, using the sort of liberal Northeastern Republicans who have since been purged from the GOP to argue that the civil rights movement was a conservative accomplishment. The Civil Rights Act of 1964 couldn’t have passed without Republican votes, but few if any of the Republicans who voted for it could survive a primary challenge today. That Republican votes were necessary for the passage of the Civil Rights Act of 1964 doesn’t change the fact that the conservative movement was ardently opposed to it.

The clearest evidence of this legacy is the current Republican Party. The priorities of today’s GOP include rolling back the very civil rights accomplishments Williams wants to take credit for. A Republican-appointee-dominated Supreme Court has all but begged for another opportunity to overturn the Voting Rights Act of 1965, and Republican-led states are falling over themselves trying to put a case in front of them. The Bush administration flooded the Civil Rights Division of the Justice Department with Republican partisans, and civil rights enforcement fell almost across the board. The GOP has since engaged in a campaign to delegitimize the entire Civil Rights Division as a font of anti-white racism. When America was rocked by the economic crisis in 2008, Republicans flocked to the explanation that decades-old laws preventing racial discrimination in lending were responsible.

Say that this opposition is all about an ideological commitment to decentralization and federalism, and has nothing to do with race. Fine: But even in unicorn-land where political views are entirely unshaped by history and culture, that philosophy is against the concept of a strong federal government that uses its powers to secure the rights of individuals even when local authorities disagree. In other words, it stands in direct opposition to what Martin Luther King Jr. and his allies were trying to accomplish, and except where gun rights are involved, it remains the prevailing ideological disposition of the modern Republican Party and the conservative movement that dominates it.