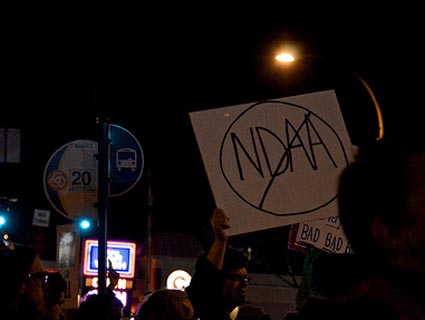 At least it’s on the record: Most House Republicans support the indefinite detention without trial of American citizens.

During Thursday’s floor debate over the latest national defense authorization act, the House GOP brought out their long knives for Reps. Adam Smith (D-Wash.) and Justin Amash (R-Mich.), who, in their view, had collaborated on a nefarious plot to undermine national security. Rep. Tom Rooney (R-Fla.) accused the lawmakers of wanting to “coddle terrorists,” while Rep. Mac Thornberry (R-Tex.) warned that under an amendment they’d introduced, “as soon as a member of Al Qaeda sets foot on US soil, they hear you have the right to remain silent.” National Review‘s Andrew C. McCarthy, a former federal prosecutor who has never heard of a same-sex marriage supporting, pro-financial regulation liberal who wasn’t secretly a member of the Muslim Brotherhood, wrote that their proposal was the result of “libertarian extremists” teaming up with liberals with an “obsession” with giving “more rights” to “mass murderers.”

What exactly was the diabolical scheme Smith and Amash had proposed, which would lead to a Normandy-like invasion of Al Qaeda terrorists armed with Muslim Heat Vision and bent on taking advantage of America’s adversarial court system? It was an amendment to the defense bill that says anyone arrested on American soil on suspicion of terrorism would get a fair trial in a civilian court, where their guilt would have to be proven beyond a reasonable doubt. Last year’s defense bill provoked a backlash, because Congress failed to establish clearly whether or not the president can lock up an American citizen without ever having to charge them with a crime. (The bill’s detention provisions were just blocked by an Obama-appointed judge, in part because a government attorney couldn’t answer the judge’s question about whether a journalist reporting on a terrorist group could be indefinitely detained without trial.)

This time around, the line is absolutely clear. Smith and Amash proposed that the government actually has to prove you’re guilty of a crime before depriving you of your liberty, something that the founding fathers found significant enough to write into the Constitution. Their opponents want the government to have the power to lock up American citizens without ever convicting them of anything, just because it says someone is a terrorist. Their proposal went down by a vote of 182-231, with only a handful of Republicans joining Amash in support.

As Smith pointed out during yesterday’s floor debate, the Fifth Amendment says no “person” shall be deprived of liberty without due process of law. It doesn’t say “citizen,” and the text of the Constitution uses both words enough that it’s clear the framers understood the difference. “Your beef is with James Madison,” Smith told Thornberry on Thursday. So keep in mind, when Republicans like Rooney say that Smith and Amash want to “coddle terrorists,” they’re not necessarily talking about some heavily armed Al Qaeda fighter in Kandahar. They’re potentially talking about you.

It’s worth noting that only twice have suspected terrorists captured on American soil been shunted into military detention, and both times the individuals in question were transferred back into the criminal justice system because of fears the Supreme Court would declare such powers unconstitutional. Since then, federal courts and civilian authorities have easily handled terrorists, citizen or otherwise, from “Underwear Bomber” Umar Abdulmutallab to Times Square bomber Faisal Shahzad. To underscore: the power to hold terror suspects captured in the US in military detention is of questionable constitutionality, has almost never been used, and confers no advantages either to incapacitating terrorists or gathering intelligence that civilian authorities don’t already possess.

Republicans opposed to the Smith-Amash amendment proposed a hoax fix that “reaffirms” Americans’ right to habeas corpus. Only the right to habeas was never in question, so their proposal doesn’t actually do anything. It is a complete non-sequitur, a bad-faith attempt to prevent Smith and Amash from closing a gaping “terrorism exception” to Americans’ due process rights. That amendment passed by almost the same overwhelming margin that the Smith-Amash amendment failed, by a vote of 243-173.

If nothing else however, it’s illuminating to watch “small-government” Republicans—who have spent the last three years lamenting the loss of freedom caused by a higher marginal tax rate or the regulation of derivatives—defend the most arbitrary big government power imaginable.