The recall epitomizes the petty, loser-take-all vindictiveness of contemporary American politics. And if you don’t agree, I’ve got two names for you: former California Gov. Gray Davis and U.S. Sen. Dianne Feinstein. Remember Davis? In 2003, he became just the second governor 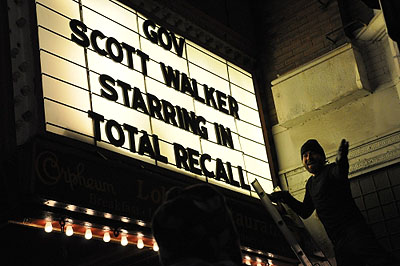 to be recalled in U.S. history. A year earlier, voters had elected Davis to a second term. As budget and energy woes engulfed California, however, Republicans saw an opportunity to get rid of him.

….As a liberal, I’m troubled by the prospect of voters unseating an elected official over taxes. Or abortion. Or gun control. If you can recall leaders for any political reason, sooner or later your own ox will be gored. I’m also worried that the Wisconsin recall, which has drawn nationwide attention and money, will trigger a vicious cycle of partisan retribution. Your guy didn’t win in November? No problem. Start a recall drive now.

I have some sympathy for this point of view. In fact, back in 2003 this was pretty much how I felt. So after Arnold won that year’s recall election in California, I waited for the other shoe to drop. And waited. And waited. And kept waiting.

This year it finally dropped, but it took nearly a decade. So what we have is two high-profile recall attempts in nine years. This doesn’t really seem like the tit-for-tat avalanche that I feared back in 2003.

In fact, Zimmerman admits as much. As he relates California’s history, we recalled a mayor in 1909, another one in 1938, and then saw a spike of recall attempts in the 70s, culminating in the 1983 recall attempt of Dianne Feinstein when she was mayor of San Francisco. And then….nothing. The wave receded until Gray Davis was recalled in 2003.

I think Zimmerman has an obviously relevant point here, and it becomes ever more relevant as our national politics becomes ever more polarized. And yet….we just haven’t seen a mighty wave of serious recall attempts since 2003. I thought we might, but I was wrong. It’s something to keep an eye on, but it’s also worth keeping in mind that Walker pretty plainly chose to govern in a far more hard-nosed, extreme, and deliberately hostile fashion than he campaigned on. Not only is it no surprise that he produced a massive backlash, but that backlash almost seemed to be part of his plan from the start. I’ll stay alert to Zimmerman’s misgivings, but for the moment I don’t think Walker’s fate is a canary in the coal mine. Unlike Gray Davis, who mostly just got screwed by Enron and never deserved to be recalled, Walker overreached, he did it deliberately and calculatedly, and now he’s facing the consequences. That’s politics.