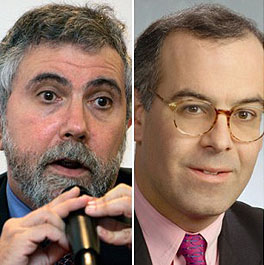 to mention each other by name. So it’s all “many people on the left” and “the renewed push by conservatives” and similar circumlocutions.

Note to the Times op-ed page: give it up. The world has long since moved on from your genteel notions of editorial propriety. Let ’em duke it out, OK?

Ahem. In any case, today’s argument is about whether our economic problems are cyclical or structural. If they’re cyclical, it means we’re in an ordinary slump and can get out of it by the proper application of monetary and fiscal policy. If they’re structural, it means we have deep-seated issues that may take years or decades to address. Low interest rates and deficit spending just won’t be enough.

I’m not going to get into the actual argument itself. You can read Brooks and Krugman for that. My layman’s sense is pretty much the same as it’s always been: Krugman is two-thirds right and Brooks is one-third right. That is, proper monetary/fiscal policy could solve about two-thirds of our unemployment problem, but a third of it is likely bound up in some long-term trends that began a decade ago — many of which show signs of getting worse as time passes.

But for some reason, what really struck me today was the way that both Brooks and Krugman play to type. Krugman the liberal is all about the data: he hauls out charts, models, “signatures,” and international comparisons. Brooks, by contrast, barely admits that data even bears on this question. He’s all about telling a plausible story: the chickens of globalization, failing education, high federal debt, and political sclerosis have finally come home to roost, so what do you expect? Of course the economy is in tatters.

You see this play out on TV too. Conservatives tell a story, and Krugman then explains impatiently that the data simply doesn’t back up what they’re saying. Every week it plays out the same way. It’s like a kabuki show.

I’m a little stuck trying to figure out how to wrap this up because I don’t really have any special insight to offer about this. I’m mostly on Krugman’s side (about two-thirds, in fact!), and over the weekend I thought about writing a long post on the whole cyclical-structural argument, but then abandoned it because others had already said most of what I would have said myself. Plus I had a deadline on some other work. But this meta-observation seems important too. Are we arguing about data or are we arguing about different views of common sense? Both, of course, but one side generally prefers facts and figures and the other generally prefers morality plays.

I’m generally on the analytic/data-driven side of things, so it’s no surprise that I mostly believe the data-driven story in this case. But for a variety of reasons, data can never tell us everything. We don’t have enough of it, it doesn’t all point in the same direction, we don’t always know how to analyze it, etc. So I find myself partly persuaded by the morality stories too. Both have their place, but who’s going to be the person to meld them together into something persuasive to more than half the country?