Regular readers know that one of my pet peeves is the notion that everyone should drink eight glasses of water a day. And that’s water and only water. Coffee, tea and Diet Coke don’t count.

It’s nonsense. There was never any science behind this in the first place, and the food you eat contains much of the water you need to stay healthy in the first place. Basically, if you’re thirsty, drink something. That’s pretty 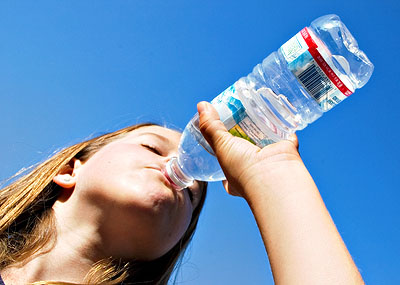 much it. Today, Spero Tsindos of La Trobe University joins the fight in an editorial in the June issue of Australian and New Zealand Journal of Public Health:

Mr Tsindos believes that encouraging people to drink more water is driven by vested interests, rather than a need for better health. “Thirty years ago you didn’t see a plastic water bottle anywhere, now they appear as fashion accessories.”….He also discusses the role of water in our constant quest for weight loss. “Drinking large amounts of water does not alone cause weight loss. A low-calorie diet is also required.”

“Research has also revealed that water in food eaten has a greater benefit in weight reduction than avoiding foods altogether. We should be telling people that beverages like tea and coffee contribute to a person’s fluid needs and despite their caffeine content, do not lead to dehydration.”

Good luck, Spero! The 2-liter myth never seems to die no matter how many people go after it, though. But I think Mother Jones readers are too smart to fall for it. If you like bottled water, fine. But you don’t need it. Tap water is fine. Juice is fine. Coffee is fine. Colas are fine. And you only need them when you’re thirsty. There’s no need — or benefit — to guzzling vast quantities of water just to meet some arbitrary quota. More details here if you don’t believe me.

You wouldn’t believe how many people come to the doctor’s office complaining of “headaches” that are nearly always dehydration….Part of it is that I live in Arizona, but the point being: the 2-liter myth is very useful in counseling those patients to drink more.

Up above, I said, “If you’re thirsty, drink something.” But there’s actually a second part to this advice: “Don’t be an idiot.” That’s sort of the unvoiced second part to all advice, though, isn’t it? In this case, it basically means that if it’s 90 degrees in the shade and you’re working in the garden or touring a city or something like that, drink plenty of water. When I was schlepping around Rome last week, I was careful to drink plenty of water even when I wasn’t feeling especially thirsty.

But now we get into a philosophical debate. Cynics will argue that, like it or not, there are plenty of idiots in the world. And if the 2-liter myth helps them out, why not spread it around? I won’t pretend that I have a gigantic problem with that, but I do think you still need to be careful. These myths have downsides too, especially when a steady stream of people hear them from practicing physicians and think of them as medical facts. So while it might make clinic life a little harder, I’d still recommend telling the truth instead. At the very least, don’t present the 2-liter myth as a firm rule. Just suggest it as a rough guideline on hot days for patients who apparently have a problem with their sense of thirst.