Now that I’m back, I’m going to try everyone’s patience by posting a really, really long slide show about my exciting family vacation to Copenhagen and Rome. However, it’s all under the fold, so if you’re not interested, just scroll on by.

There are basically no pictures of famous sights here. It’s always been a bit pointless to take pictures of this kind of stuff, and these days it’s super duper pointless. Want a picture of the Colosseum? Google will deliver hundreds of top notch photos to your desktop in seconds. Why bother taking your own?

So instead, I took pictures of cats. And pictures of other animals. And a few annoyingly arty pictures of tiny bits of famous sights. Plus a few other things that I felt like including and that gave me an excuse to write about something interesting. Click the link to start.

And now a short intermission in praise of United Airlines. We all complain a lot about poor service, and in fact I tweeted a nastygram about the teensy seats on our United flight from LA to Heathrow while we were on the tarmac in LA. But when I lost my iPad, United really shined. The flight attendant took down all my information. The captain radioed it all back to LAX. Someone there went out to look for it. The baggage services folks emailed me a couple of days later to tell me they had it, and offered to Fed Ex it to me overnight if I wanted. (I didn’t.) When I got back, they retrieved it for me in seconds. Nice work, United Airlines! You saved me a world of grief.

I now return you to our regularly scheduled vacation blogging.

So that’s our vacation. With a couple of exceptions, it was all pretty nice and we did everything we planned to do. But here’s a question for the hivemind. One thing that really got to me on this trip was the astounding size of the crowds in Rome. It felt like it was just wall-to-wall humanity, with gigantic tour buses belching out packs of 40 or 50 tourists every couple of minutes. By the end of the week it felt much more oppressive than it did the last time I was there in 2002.

Obviously Rome is a crowded city, and it’s not as if it’s been empty the times I’ve been there before. (Though Marian and I were both amused at the almost complete absence of people in Roman Holiday, which we watched before the trip.)  So here’s my question. Was I just more sensitive to the crowds this time around? Or have they really gotten worse? If so, why? Is late May a busier season than late September? Was 2002 a light tourist year because it was still shortly after 9/11? Are tour groups more popular than they used to be? Anybody have any ideas about this?

And now, as your reward for reading to the very end, some real catblogging. Thanks to the computer failure in Frankfurt, our luggage decided to take the scenic route home and arrived at our door shortly before midnight on Friday. We unpacked Saturday morning, and both suitcases were immediately claimed as snoozing spots. Domino staked out the big gray suitcase and Inkblot settled into the smaller red suitcase.

Regular political blogging will recommence on Monday. In the meantime, enjoy the rest of your weekend. 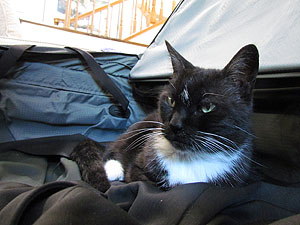 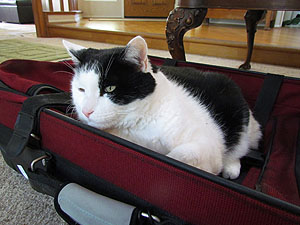