Having already written half a dozen posts about the Supreme Court’s decision in the Obamacare case, over lunch I decided to dive into the dissent, authored by Antonin Scalia. It’s fairly remarkable.

First off, Scalia invalidates the individual mandate completely. The Commerce Clause doesn’t justify it because Congress can’t compel people to participate in commerce, and Congress’s taxing power doesn’t justify it either because it’s a penalty, not a tax. This isn’t unexpected, though it’s a little surprising that Scalia barely even bothers to address the argument that, by its nature, everyone already participates in the healthcare market, so the individual mandate isn’t truly compelling anything in the first place. Young people, Scalia says, “are quite simply not participants in that market,” and can’t be made so by arguing that they’ll participate later in life. But that’s never been the whole argument. The argument is that healthy young people already participate in the market today because taxpayers end up paying for their care if they have an unexpected illness and end up in the emergency room. You might or might not buy that argument, but Scalia just blithely ignores it.

But if striking down the mandate wasn’t too unexpected, the Medicaid dissent is more surprising. In the majority opinion, seven justices agreed that Congress had overreached 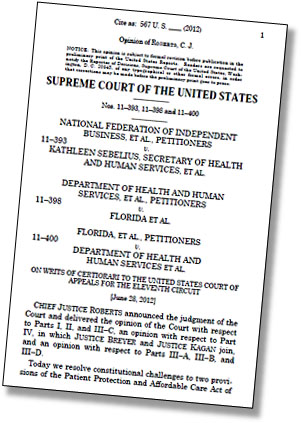 Scalia agrees, but says the court can’t simply strike down this penalty. Instead, it has to invalidate the entire Medicaid expansion:

The reality that States were given no real choice but to expand Medicaid was not an accident. Congress assumed States would have no choice, and the ACA depends on States’ having no choice, because its Mandate requires low-income individuals to obtain insurance many of them can afford only through the Medicaid Expansion. Furthermore, a State’s withdrawal might subject everyone in the State to much higher insurance premiums.

….Worse, the Government’s proposed remedy introduces a new dynamic: States must choose between expanding Medicaid or paying huge tax sums to the federal fisc for the sole benefit of expanding Medicaid in other States. If this divisive dynamic between and among States can be introduced at all, it should be by conscious congressional choice, not by Court-invented interpretation.

This is fairly breathtaking. Congress routinely makes federal funding of new programs dependent on acceptance of federal regulations. The majority ruled that this long-accepted practice was as far as Congress could go and therefore rolled back the more stringent penalty. But Scalia argues that the court can’t do that. The court can’t simply roll back Congress’s overreach, it has to wipe out the program completely. Why? Because (a) a reduced incentive to accept the Medicaid expansion might have knock-on effects, and (b) states that don’t accept the Medicaid expansion would be faced with the prospect of paying tax dollars for the sole benefit of other states. Scalia is unfazed by the fact that the first reason is wildly speculative and the second has been true of every federal program in history that disburses money to states. The fact is that withholding new money has always been sufficient in the past to get essentially unanimous buy-in from the states, and Scalia doesn’t really have much basis for thinking that it wouldn’t do so this time too.

The rest of the opinion follows fairly mechanically. Without the mandate and the Medicaid expansion, the exchanges don’t work. Without the exchanges, the employer incentives don’t work. Without those four things, the tax increases don’t make sense. At this point you’ve gutted the all the major provisions of the act, and without them there’s no way Congress would have passed any of the rest of it. This is Scalia’s “Christmas tree” doctrine: “When we are confronted with such a so-called “Christmas tree,” a law to which many nongermane ornaments have been attached, we think the proper rule must be that when the tree no longer exists the ornaments are superfluous.” Basically, Scalia says, the whole act was a gigantic orgy of horsetrading, and when you invalidate some pieces of the act, you have to assume that Congress wouldn’t have passed any of the other pieces either.

This is a very far-reaching dissent, and goes to show just how far four members of the court are willing to go. They didn’t choose the most restrained option, overruling only what they absolutely had to. They gleefully took a meat axe to everything, concluding that the only possible resolution was to completely invalidate the major provisions of the law, and then to invalidate the entire law. And although they may not have enunciated a new limiting principle on the Commerce Clause (aside from deciding that Congress can’t compel activity), they made it crystal clear that they’re eager to rein in Congress in the future.

What’s more, unlike Chief Justice John Roberts, they showed no inclination to allow Congress to use its taxing power instead to achieve ends denied them under the Commerce Clause. This goes even beyond the 1930s court, which struck down several New Deal laws but made it clear that they’d uphold similar laws in the future if only Congress would justify them via its taxing power.

There are now four votes on the court to radically restrict the power of Congress to enact social legislation. For some reason, Roberts chose not to be a fifth vote this time, but no one knows quite why he did that. Possibly he was put off by the prospect of overturning an entire piece of landmark legislation, on a 5-4 party-line vote, based on a new and untested doctrine that had never seen the light of day prior to 24 months ago. In fact, it’s possible that Roberts was initially willing to join the four conservatives, but then flipped sides when they implacably insisted on gutting the entire measure. If that’s the case — and there’s some evidence that it is — liberals were saved not by the force of their arguments, but purely by the intransigence of the court’s conservatives.

Needless to say, we can’t count on that saving us in the future. We may have won the battle today, but it doesn’t seem likely that we’ve won the war.

UPDATE: Adam Serwer has a different take here: “The Medicaid ruling is a concern. But the good news for liberals in the Affordable Care Act ruling is concrete and easy to see. The dangers are, for now, entirely hypothetical.”

I agree, and obviously this is all pretty speculative. I’m just afraid that the dangers might not stay hypothetical forever.