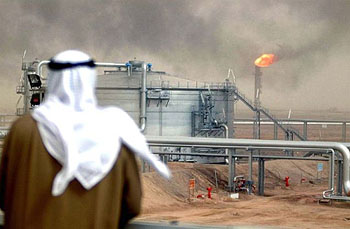 Stuart Staniford reviews the recent rise and then collapse of oil prices today, and concludes that it’s the economy, stupid:

So whither these trends now? On the one hand, it seems clear that the recent downward forces on prices will continue….Spain’s difficulties rescuing Bankia, and the fact that there are likely still a lot of not-fully-discounted bad loans in Spain’s banks, suggest that the Spanish government is near the end of its rope….And then there is the continued inability of the polarized US political system to come to grips with major challenges — particularly the upcoming expiry of the Bush tax cuts and the automatic spending cuts that will be triggered around the end of this year. All this is chilling stock markets everywhere, particularly as no-one really knows what the implications for the global financial system will be if pieces start to fall off the Eurozone as it trundles forward.

These kinds of considerations suggest that the downward break in oil prices could continue quite a lot further.

But if that happens, Saudi Arabia will probably cut production and prices will rise again. So oil prices may fall in the short term, but will probably stay around $100 in the medium term.

Generally speaking, we’re finally living in the world of peak oil. Or call it plateaued oil if you like, since we seem to have hit a rough plateau in oil production that’s likely to continue for quite a while. This is the world of the vicious circle: when the economy gets better, demand for oil goes up and oil prices spike. This causes the economy to tank, which sends demand for oil down. Rinse and repeat. Add to that the effect of external events on oil prices (the Arab Spring, pipeline breakdowns, embargoes on Iran, etc. etc.) and world economic growth is likely to remain both sluggish and unstable for the foreseeable future, held hostage to OPEC oil production until we get serious about alternative energy. And since, in this brave new world, the price of oil gyrates frequently and erratically, it’s hard to get people serious about this. If oil were, say, permanently above $200 per barrel or so, we’d be building wind farms and installing PV solar at breakneck speed. But whenever the price of Brent falls below $90 or so, everyone gets nervous and wonders if wind farms and solar arrays are really such good investments after all.

The uncomfortable truth is that we’d probably all be better off if the federal government simply taxed oil variably at a rate that set the all-in price at $200 no matter what the market price was. That would be high enough to get everyone serious about more reliable energy sources and stable enough that investors would be falling all over themselves to fund alternative energy projects. And since it’s oil price spikes that hurt the economy more than high oil prices per se, this probably wouldn’t even have a major impact on growth.

It’ll never happen. But something like it probably should. There’s enormous upside both economically and environmentally, and the revenue would help address the federal deficit problem everyone pretends to be worried about. Conversely, the downsides are pretty modest and manageable. Wouldn’t it be nice if any of this actually made a difference in Washington DC?