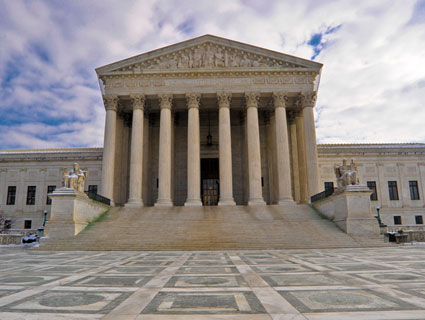 As everybody waits with bated breath for the Supreme Court to release its ruling on Obamacare (maybe Monday!), the fashionable parlor game among the chattering classes is to figure out what the impact of different kinds of rulings would be. So let’s play! But most of the alternatives are uninteresting. If the court upholds the law, then everything goes forward as planned. If they strike down the entire law, then everything stops. The only interesting question is: What if they strike down the individual mandate but uphold the rest of the law?

We can game this out, but first you have to understand just who would be most upset by a ruling like this. The answer is: insurance companies. You see, the Affordable Care Act (ACA) requires insurance companies to accept anyone who applies for coverage and to charge everyone (with some specific exceptions) roughly the same rate. This works fine if insurance companies get a random selection of customers. They can easily figure out the average cost of care for this random group and then charge everyone that average, plus a little extra so they make some money. Nice and neat.

Also read: How Republicans have flip-flopped on the individual mandate.

But without a mandate, they’re unlikely to get a random selection of customers. Instead, healthy folks will probably stay out of the market and buy coverage only when they come down with some kind of serious illness. This is a disaster for insurers. They aren’t getting regular premium payments from these customers, but they still have to pay for their million-dollar proton beam therapy when they get prostate cancer. Too much of this kind of behavior and they’ll be out of business. That’s why this dynamic is called a “death spiral.”

So what happens if the mandate is overturned? Here’s one possible scenario, along with my guesses about the likelihood of each step:

This is a very rosy scenario. The usual objection is that No. 4 is wrong and, in fact, the death spiral happens more quickly—say, within four or five years. In this case, insurance companies will genuinely be in dire straits and will begin to put so much pressure on Congress that even conservatives realize they have to do something. By the time this happens, ACA will be so entrenched that repealing it just isn’t in the cards, which means that either Congress passes a constitutionally approved version of the mandate (for example, by making it a tax credit) or else nationalizes health care even further.

Overall, this is the most optimistic possible set of outcomes. In both cases, ACA is basically safe, either because the law’s other provisions dampen the effect of the death spiral or because Congress is forced to take action in order to save the insurance industry.

Do I believe this? Actually, yes. Despite the fact that I think overturning the mandate would be a constitutional disaster, I’m not convinced it would inevitably be a health care disaster. It would unquestionably create a fair amount of unnecessary uncertainty, but in the end, things would probably work out okay as long as Democrats have the spine to continue defending the basic law. Time will tell about that.