Mitt Romney’s verbal stumbles in London yesterday probably won’t have much long-term impact on the presidential campaign. Still, Dave Weigel points out something interesting about them. The best-known gaffes of the past few months have been mostly fabricated by the opposing campaign 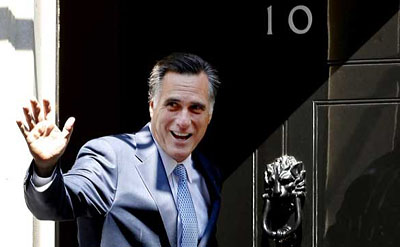 trying to make hay out of something that only barely exists. But not this time:

Compare this to what the British press has termed the “Romneyshambles.” By chance, I was in a BBC studio yesterday morning to do a radio interview with another outlet. Non-reporter staff — people who did not cover the campaign, much less work on it — were chattering about Mitt Romney. The general tone was that, yes, they’d had some problems staging the Olympics, but that was up to them to talk about, not some American who’d run his own Olympics 10 years earlier. As I waited, I saw Prime Minister David Cameron — who is, remember, the first Conservative PM since 1997 — make a backhanded slap at Romney. “Of course it’s easier if you hold an Olympic Games in the middle of nowhere,” he said. Later, like everybody else, I saw London Mayor Boris Johnson — also a Conservative! — make fun of “some guy named Mitt Romney” in front of a massive Olympics crowd.

There was no rival campaign cooking this up. There was no social media director making sure people tweeted it, or hashtagged it, or Google+’d it, if Google+ is still a thing. British Conservatives and media actually got pissed off at what they heard as an unhelpful insult. We’ve suffered through so many phony gaffes, we’d forgotten what a real one looked like.

That’s an interesting point. As interesting as we’re likely to get, anyway. And who knows? The fact that it’s real, and that Romney followed it up with a series of other odd, Palinesque gaffes, has the potential to make a small dent in Romney’s only real strength as a candidate: the notion that he’s smart, disciplined, and well-briefed. Not so much, it turns out.

But for my money, if you’re looking for a classic “gaffe,” the kind that reinforces what everyone thinks of a candidate already, it was this cringe-inducing response to a question about the dressage competition:

I have to tell you, this is Ann’s sport. I’m not even sure which day the sport goes on. She will get the chance to see it, I will not be watching the event. I hope her horse does well.

This was painful to hear. I mean, what would any normal husband do if his wife were involved in an Olympic competition, even one he personally found boring? He’d attend! He’d cheer! That’s what married people do. But Romney has been taking some flak for being a rich dude lately, and he’s obviously calculated that being associated with a multimillion-dollar sport — and an obscure, sort of prissy one at that — wouldn’t do his campaign any good. So he threw his own wife under the bus. Mitt Romney is willing to be whatever the electorate wants him to be, and apparently he crunched the numbers in his head and decided that America’s heartland voters didn’t want him to be associated with his wife’s sport.

It’s a trivial thing, but still, in its own trivial way it’s really contemptible behavior, even for a guy who long ago decided he’d do anything to become president. The first time I read that quote I recoiled, and I still do a day later even after I’ve seen it a dozen times. What a gutless little weasel.