Paul Ryan fought the 2009 stimulus bill but then worked to get stimulus dollars for his constituents. I don’t have a problem with this. Once the bill had passed against his wishes, the money was going to be spent. Ryan’s constituents deserved their share of the money as much as anyone else. After all, I think the mortgage interest deduction is bad policy, but that sure doesn’t stop me from declaring it on my tax return.

Today, though, Kathleen Hennessey of the LA Times highlights a slightly lesser known part of Ryan’s record: his vigorous efforts to save a GM plant in his hometown:

A General Motors plant, the lifeblood of his hometown, was set to close. The huge Suburbans and Tahoes from the Janesville production line were no longer in vogue. The aging plant was to 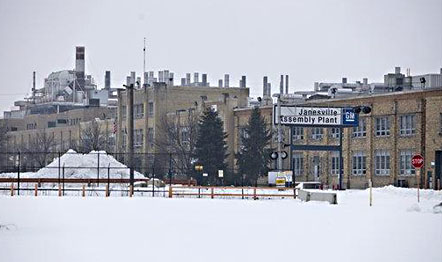 stop production by Christmas — unless Ryan and other Wisconsin officials could save it.

Ryan, then the ranking Republican on the House Budget Committee, flew to Detroit to cajole GM executives. For more than an hour, he and other officials made a PowerPoint proposal that mixed union concessions with unprecedented state and local tax breaks for GM….Ryan helped pitch a $224-million proposal that included roughly $50 million in state enterprise zone tax credits, local government grants worth $22 million, and major contract concessions from the United Auto Workers union local.

But it soon became clear that the future of Janesville — and all of GM — hinged on federal intervention.

In late November, executives from Detroit’s Big Three flew to Washington to ask for a bailout. The next day, Mitt Romney made his opposition clear in a New York Times op-ed titled, “Let Detroit Go Bankrupt.”

Ryan disagreed. He supported a House bill that offered $14 billion in fast-tracked loans to GM and Chrysler. Ryan cited his district’s “gut-wrenching” experience with layoffs, and a commitment to the auto industry. He also suggested that, under other circumstances, he might have voted no.

“At the forefront of my mind are jobs in southern Wisconsin and the retiree commitments to workers that could be placed in jeopardy under certain bankruptcy scenarios,” Ryan said at the time. He said he backed the plan because it relied on previously appropriated money for auto technology loans, not added spending.

This is, needless to say, quite a different thing. Ryan didn’t take advantage of a program that had been passed over his objections. On the contrary: he fought hard for a corporate bailout of the kind he now says he opposes. But back when it counted, he didn’t oppose it. He supported it. Just like he supported the Bush administration’s wars, Medicare Part D, No Child Left Behind, and TARP, even though none of them was paid for.

You might, of course, believe that Ryan had a genuine change of heart on January 20, 2009, and suddenly decided that the federal deficit was out of hand and needed to be reined in. Or you might believe that something else happened on that day. It’s your call.