The New York Times reports on the latest draft budget from Greece:

The draft budget spells out about $10 billion in spending cuts and savings for 2013. About one-quarter of that would come through reductions in civil servants’ salaries and social welfare benefits, and about 15 percent through cuts in spending on health, defense and local authorities, the government said.

….The draft budget is expected to be revised significantly because it must be approved by the country’s troika of foreign lenders — the European Commission, the European Central Bank and the International Monetary 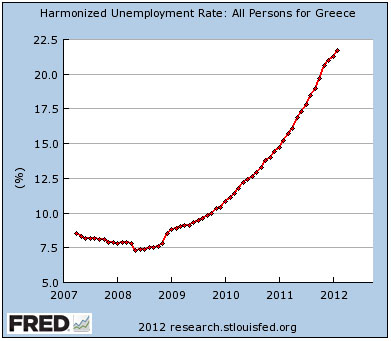 Fund — before it can be submitted for a parliamentary vote. The troika is insisting on further cuts in the public sector — including laying off public servants, a political third rail in Greece and other European countries — while the coalition government has been pushing back.

….The negotiations are taking place against a backdrop of unrelenting, depression-level conditions in the Greek economy, which the draft budget predicted would contract by 6.5 percent this year and by 3.8 percent in 2013 — far more than the troika’s earlier estimates and about 25 percent below its peak before the crisis struck. The budget says unemployment is expected to rise to 24.7 percent from 23.5 percent this year.

Just for perspective, this is about a 10% cut in total government spending. The U.S. equivalent would be a cut of about $350 billion in federal spending and another $200-300 billion in state and local spending. All against the backdrop of an economic catastrophe that rivals the Great Depression in scope and will be made even worse by the proposed spending cuts.

If you happen to be wondering why Greeks are rioting in the streets, this is why. You might be too if this were happening to your economy.