In the Washington Post today, Jackson Diehl writes that President Obama’s approach to Syria has been a serial failure. He tried engaging with Bashar al-Assad. That didn’t work. When war broke out, he tried brokering a settlement via the United Nations. That didn’t work. Then he tried to get Vladimir Putin on his side. That didn’t work either. So what now?

For the past three months, Obama’s policy has become a negative: He is simply opposed to any use of U.S. power. Fixed on his campaign slogan that “the tide of war is receding” in the Middle East, Obama claims that intervention would only make the conflict worse — and then watches as it spreads to NATO ally Turkey and draws in hundreds of al-Qaeda fighters.

No doubt it’s easier for Romney and the Republicans to talk about the death of an ambassador in a terrorist attack than to ask war-weary Americans to think about this. But it is Syria that is Obama’s 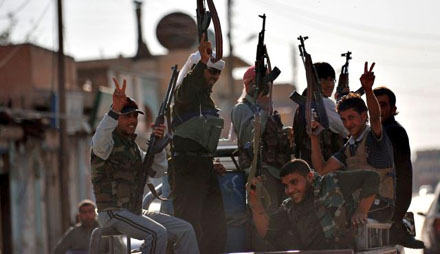 greatest failure; it will haunt whomever occupies the Oval Office next year.

These kinds of columns always stonker me. The reason is that nothing comes after these two paragraphs. Diehl spends 800 words disparaging Obama’s failure in Syria — which is fair enough, up to a point — but won’t tell us what he thinks Obama should have done. It’s just like Paul Ryan’s painfully evasive answer about Syria in last week’s debate. After Ryan went through the same stale bill of particulars that Diehl did, Joe Biden smiled and asked, “What would my friend do differently? If you notice, he never answers the question.” That was true, and after a bit more filibustering Martha Raddatz asked Ryan three times, “What’s your criteria for intervention?” He wouldn’t answer.

Nobody ever does. Sure, we could provide arms directly to the rebels — though the failure so far of indirect arms transfers should give everyone pause for thought on that front. We could provide them with a bit more intelligence. We can keep trying to beef up sanctions. But that’s penny ante stuff. It wouldn’t make a big difference and everyone knows it. You’d need a sustained ground action or, at the least, a sustained bombing campaign to really make a dent.

We could do that, of course. We could send in ground troops. We could provide air cover for the rebels. We could lob cruise missiles into Damascus. But look. Since he took office, Obama has doubled our presence in Afghanistan. He’s participated in an armed intervention in Libya. He’s ramped up the drone campaign in Pakistan and Somalia by 10x. That’s three wars. Do Ryan and Romney and Diehl and their friends really think we need yet another one? If they do, they should speak up plainly instead of pretending that if only Obama had waved his magic wand, Assad would already be out of power.

If you want us to go to war in Syria, have the guts to say so. If you don’t, say that too. But if that’s the case, at least have the grace to put a lid on the bluster and the fatuous recriminations. It’s contemptible stuff.