Here’s the exchange of the night, coming right after Romney tried to score a point by claiming that it took Obama two weeks before he referred to the Benghazi attack as an act of terror:

ROMNEY: I think it’s interesting the president just said something, which — which is that on the day after the attack he went into the Rose Garden and said that this was an act of terror.

OBAMA: That’s what I said.

ROMNEY: You said in the Rose Garden the day after the attack, it was an act of terror? It was not a spontaneous demonstration, is that what you’re saying?

ROMNEY: I want to make sure we get that for the record because it took the president 14 days before he called the attack in Benghazi an act of terror. 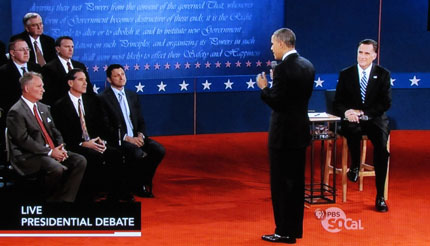 OBAMA: Get the transcript.

OBAMA: Can you say that a little louder, Candy?

Obama played this really, really well. He let Romney dig himself into an ever deeper hole, and just smiled when Romney tried to get him to directly deny it. This turned out to be either lucky or smart, because it gave Candy Crowley a chance to fact check Romney and confirm that she was there and she heard Obama refer to Benghazi as an act of terror on the very next day. This is going to get a lot of play. It was also a serious own-goal for Romney, who had plenty of strong criticisms available on Libya but ended up overreaching on a very specific charge that was dead wrong. That was dumb.

Maybe the second best moment came when Romney was defending himself against charges that he invested in China:

ROMNEY: Mr. President, have you looked at your pension?

OBAMA: You know, I don’t look at my pension. It’s not as big as yours so it doesn’t take as long.

This was a weird moment. The original charge from Obama was a tired attack about Bain Capital investing in companies that specialized in outsourcing, and Obama deserves a ding for that. On the other hand, it had come about five minutes earlier, and it was kind of bizarre that Romney suddenly decided he had forgotten to respond to that and brought it up again out of nowhere. And then it turned around and bit Romney in the ass when Obama got off a pretty good line in response. Just goes to show the value of discipline. Romney should have left well enough alone.

And here was Obama’s third-best moment:

So what I’ve said is, your first $250,000 worth of income, no change. And that means 98 percent of American families, 97 percent of small businesses, they will not see a tax increase. I’m ready to sign that bill right now. The only reason it’s not happening is because Governor Romney’s allies in Congress have held the 98 percent hostage because they want tax breaks for the top 2 percent.

I liked the hostage talk there. But I have no idea whether anyone else liked that passage as much as I did.

Andrew Sullivan, who has spent the past couple of weeks in wrist-slitting mode, is now thrilled: “To my mind, Obama dominated Romney tonight in every single way: in substance, manner, style, and personal appeal. He came back like a lethal, but restrained predator. He was able to defend his own record, think swiftly on his feet, and his Benghazi answer was superb. He behaved like a president. He owned the presidency. And Romney? Well, he has no answers on the math question and was exposed. He was vulnerable on every social issue, especially immigration. And he had no real answer to the question of how he’d be different than George W Bush.”

A lethal but restrained predator!

Apparently, “binder full of women” is the Twitter and Facebook catchphrase of the night. This is a reference to Romney’s claim that when he became governor of Massachusetts and put together a cabinet, “I went to a number of women’s groups and said, ‘Can you help us find folks,’ and they brought us whole binders full of women.” This entire passage struck me as vaguely patronizing at the time, though I confess that when I re-read it in transcript form it didn’t seem so bad. Maybe it was something in Romney’s tone, which seemed a little false in a “some of my best friends are black” kind of way.

UPDATE: Now I remember the lines that struck me as patronizing. First Romney admitted that his entire staff was initially unable to find any qualified women to work in his administration. Then, a little later, he said this: “We’re going to have to have employers in the new economy, in the economy I’m going to bring to play, that are going to be so anxious to get good workers they’re going to be anxious to hire women.” I don’t think Romney meant anything patronizing here, but it was unfortunate wording nonetheless. It implies that employers will only hire women once the economy gets strong enough that they’re desperate to hire just about anyone.

What actually happened was that in 2002 — prior to the election, not even knowing yet whether it would be a Republican or Democratic administration — a bipartisan group of women in Massachusetts formed MassGAP to address the problem of few women in senior leadership positions in state government. There were more than 40 organizations involved with the Massachusetts Women’s Political Caucus (also bipartisan) as the lead sponsor.

They did the research and put together the binder full of women qualified for all the different cabinet positions, agency heads, and authorities and commissions. They presented this binder to Governor Romney when he was elected.

Sheesh. Romney is just constitutionally programmed to deceive, isn’t he? And all in service of a point that probably won him no favors with women anyway.

Andrew Sprung thinks Obama saved the best for last: “Lord-a-mercy, Obama just killed Romney on the 47%. Was it genius, or luck that he saved it for the end, when there was no time for rebuttal?” Here’s what Obama said:

I believe Governor Romney is a good man. Loves his family, cares about his faith. But I also believe that when he said behind closed doors that 47 percent of the country considered themselves victims who refuse personal responsibility, think about who he was talking about. Folks on Social Security who’ve worked all their lives. Veterans who’ve sacrificed for this country. Students who are out there trying to hopefully advance their own dreams, but also this country’s dreams. Soldiers who are overseas fighting for us right now. People who are working hard every day, paying payroll tax, gas taxes, but don’t make enough income.

James Joyner thinks Obama won the debate, but: “Overall, even if the debate is a draw, it’s a minor win for Obama simply because it stops the bleeding from Round 1.” That’s probably true.

Ed Kilgore: “Imaginative Romney effort to make ‘self-deportation’ sound like defense of immigrants’ autonomy. Didn’t work.” Yeah, that was definitely a nice try, but still pretty lame. Here was Romney’s quote: “Self-deportation says, let people make their own choice. What I was saying is, we’re not going to round up 12 million people, undocumented illegals, and take them out of the nation. Instead let people make their own choice.” I doubt that this cut any ice with anyone, though the truth is that “self-deportation” is (a) genuinely moderate compared to the Republican Party mainstream, and (b) not really very different from the policy Obama has followed for the past four years.

By the way, the big loser tonight was climate change. Neither candidate mentioned it, but they practically fell all over each other to declare their love for coal and fracking and drilling for oil on federal land. Yuck.