Earlier this morning I posted a chart from John Sides showing that people didn’t perceive Mitt Romney as any more moderate after Wednesday’s debate than before. That was interesting, but sort of limited. What I was really curious about was how perceptions of Romney as a person changed. Did he seem more or less honest? More or less energetic? More or less plutocratic? Etc.

Well, John must have been reading my mind, because a few minutes ago he put up a post showing exactly that. Here are the before and after responses among independents for six specific character traits: 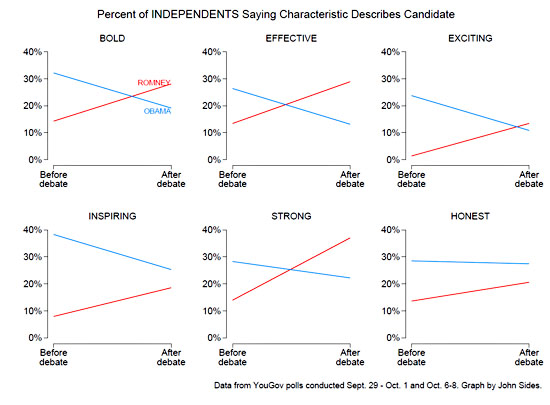 This is, obviously, pretty powerful stuff. It doesn’t tell us whether these changes were mostly due to the debate performances themselves or to the media coverage afterward, but it certainly shows that perceptions of Romney and Obama shifted fairly dramatically. What’s more, as John points out, Romney even gained in people’s perceptions of his honesty. The fact that he tossed out so many specific numbers and plans, and tossed them out with confidence and vigor, apparently made people decide that he must be telling the truth.

You can draw your own conclusions from this. On the honesty front, there are two obvious lessons you could take away:

My heart says #1 is right, but my head says #2 is right. Viewers just tune out when debates turn into a battle of numbers. The key to success lies elsewhere.