I want to second this remark from Ed Kilgore:

Before it becomes a kind of Fact-Made-Fact-By-Repetition, I’d like to challenge the much-assumed idea that in the first presidential debate Mitt Romney “moved to the center” in a real, substantive way. This seems to be the conclusion of many Democrats, many in the MSM, and of those few Republicans who occasionally object to the endless rightward drift of the GOP.

Sure, his rhetoric sounded more moderate. But when you look at the details, nothing changed.

Ed provides chapter and verse in the rest of his post, which is worth a read. But I’d like to add a related thought: relatively speaking, Romney was never all that far to the right in the first place. Sure, he’s adopted all the standard positions of the modern tea-party-ized GOP, but during the primaries he was always 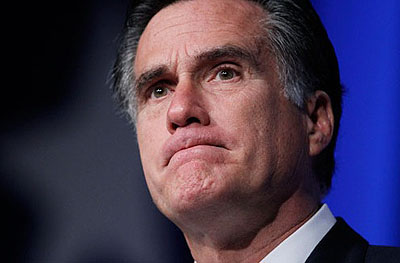 pretty careful not to go any further than that. On actual policy, he never tried to move to the right of Newt Gingrich or Michele Bachmann or Rick Perry.

What he did do was adopt a “severely conservative” rhetorical style, highlighted by his almost comically harsh attacks on Barack Obama. He was content to let the other candidates offer up redder meat than he did, but he always insisted on making sure that everyone knew his contempt for Obama was second to none. At the time, I figured this was deliberate: he didn’t want to take any insane positions that might hurt him in the general election, but he still wanted to do something to show tea party voters that he was one of them in his heart. The way he did that was by never letting five minutes go by without launching yet another over-the-top verbal volley against Obama.

And it was a good strategy! It’s easy to ditch attacks like that after the primary is over, and for the most part he has. Ever since spring, Romney’s schtick has been an almost sorrowful acknowledgment that Obama is a good man, an honorable man, but in over his head. The harshness is mostly gone, and hardly anyone has even noticed that his attacks on Obama changed course rather abruptly as soon as he became the consensus nominee in April. And since then he’s also solidified his standing with the tea party base strongly enough that he can get away with some rhetorical concessions on policy as well. This resonates more strongly with the pundit class, but Ed is right: on substance, Romney hasn’t changed a thing. He still won’t accept a dime in revenue increases; he still plans to cut taxes substantially on the rich while claiming he’s doing no such thing; he still wants to voucherize both Medicare and education spending; he still wants to turn Medicaid over to the states and slash its funding; he still wants to increase the defense budget; he still wants to repeal both Obamacare and Dodd-Frank; and he still claims to be a deficit warrior even as he refuses to provide any details about just how he’d actually cut the deficit.

The new, more bipartisan Romney should be taken for what it is: a campaign stratagem, not a real change. He isn’t moving to the center, he’s just trying to sound like he’s moving to the center. My guess is that it won’t work, but given the obsession of the Washington press corps with optics and conflict, it might. You never know.