I’m a little nonplussed that it’s suddenly become a thing to write about whether any self-respecting liberal can vote to reelect Barack Obama, given that he’s a warmonger who kills innocent Muslims with his drone attacks. The reason I’m nonplussed is that this meme got kicked off by a piece written last week by Conor Friedersdorf in the Atlantic, and Conor isn’t a liberal. Of course he’s not thrilled about the prospect of voting for Obama. Not only does he dislike Obama’s foreign policy, but he doesn’t like Obama’s domestic policy either: as far as I know, he’s not a fan of Obamacare or the stimulus bill or Dodd-Frank or Obama’s 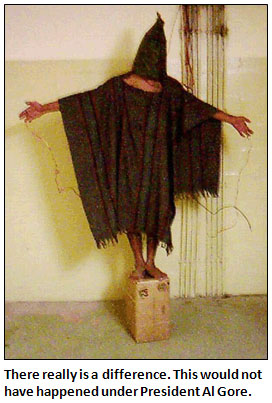 dismissal of Simpson-Bowles or any of that. There’s nothing much there for him to like aside from the repeal of DADT.

In other words, Conor’s piece is about the equivalent of E.J. Dionne telling us why he won’t vote for Romney. Of course he won’t. Who cares?

That said, if you’re an actual lefty agonizing over whether you can possibly support the lesser of two evils this year, I have nine words for you: How did that work out for you in 2000? Even if you assume that Al Gore would have passed the Patriot Act; and invaded Afghanistan; and given the NSA free rein to engage in wholesale amounts of warrantless surveillance; and approved the torture of enemy combatants — even if you assume all that, do you think we would have invaded Iraq if Al Gore had been president? That didn’t just happen, after all. It’s not as if the public was baying for Saddam Hussein’s scalp. It happened only thanks to a very determined effort by Dick Cheney and his fellow neocon sympathizers, and it happened only after a very deliberate, months-long marketing campaign from the Bush White House.

Now sure, you can spin weird counterfactuals here if you want to, but really, there’s just no plausible scenario in which this would have happened under President Al Gore. And on the warmonger front, that’s a pretty big deal, no? Frankly, if Al Gore had literally implemented the entire Bush agenda except for the Iraq war, that would be reason enough to vote for him.

In other words: yes, there really is a difference. Libya and the drone strikes don’t even come close to comparing to Iraq. So go ahead and vote for Gary Johnson if you must, but do it with your eyes open. Whatever good it accomplishes, it also puts us one vote closer to having Dick Cheney’s old foreign policy gang back in the West Wing. I’m not quite sure how the math on that one ever gets above zero.