In Politico, John Harris and Jonathan Martin complain that although both sides tried to pretend the 2012 election was an apocalyptic choice between competing worldviews, in the end it turned out to be “small”:

These two opposites in fact are closely connected. Yes, there are specific people to blame, and no better place to start than the top: Barack Obama and Mitt Romney were co-conspirators in driving what they both claimed was the most important election of our lifetimes into cul-de-sacs of trivia and evasion. But it is clear that both men found themselves caught in a vortex of large forces that converged to make the election small.

The arguments were small….The playing field was small….Most of all, the leading actors were small — either content with their diminished stature or powerless to change it. Obama, who four years ago encouraged people to view him as an epic figure, riding a wave of history, this 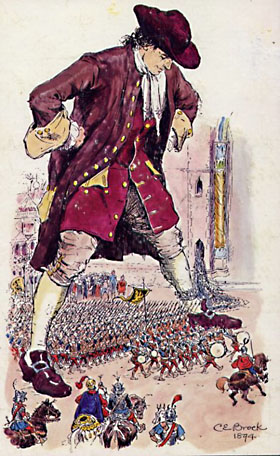 time encouraged people to view him in life-size terms, as a mortal figure who had done the best he could amid setbacks and disappointments.

There’s a lot to this, but I think Harris and Martin miss the real reason for it: for all the sound and fury, there’s a remarkable amount of consensus over big policies in America. The welfare state that Democrats have built over the past 80 years—Social Security, unemployment insurance, Medicare, subsidized public education, welfare, and the minimum wage—is pretty much here to stay, with neither side able to change it except on the margins. Ditto for the regulatory state: OSHA, workers comp, environmental regulations, consumer-protection laws, and, most recently, Dodd-Frank. Social attitudes continue to loosen up slowly in some areas (gay rights, religiosity) and remain stable in others (guns, abortion). Most of the heavy lifting on civil rights—the Civil Rights Act, the Voting Rights Act, affirmative action, gender discrimination laws, the Violence Against Women Act, and ADA—was finished years ago, with little left on the national agenda aside from things like the precise boundaries of affirmative action. Conservatives have won some battles too. We’ve reached a rough consensus on taxes, arguing now only about whether the marginal rate on top earners should change by four percentage points, and as Benjamin Wittes argues persuasively today, for better or worse we’ve reached a rough consensus on national security issues too. Extinguishing the private sector labor movement was a big deal for Republicans over the past few decades, but that job is mostly finished.

I’m not trying to downplay how important small changes can be, especially as they build up over time. Trench warfare may not be glamorous, but it makes a difference. And in some ways, the very lack of detail in the 2012 campaign has been refreshing: it made the campaign into a pure debate over broader views of the role of government without getting too caught up in all the niggling details.

But here’s something else interesting: I’d say there are at least two very concrete areas where today’s election really will make a big difference. And yet, neither candidate spent much time talking about them. The first is abortion, where Supreme Court nominees over the next four years have at least the potential of overturning Roe v. Wade. But while the “war on women” has been a Democratic talking point all year, it’s never really become a major campaign topic.

And the second? Obamacare. This is the capstone of the Democratic welfare state, the final big-ticket program that’s eluded liberals for nearly a century. In Joe Biden’s memorable words, it’s a big fucking deal. If Romney were elected along with a Republican Senate, he’d almost certainly be able to badly cripple Obamacare, even if he couldn’t quite repeal it outright. If Obama wins and keeps the Senate in Democratic hands, it will become institutionalized. And like Social Security and other similar programs that started out small, it will grow over time until, eventually, America really does have universal healthcare.

But as with abortion, it simply hasn’t been a big campaign issue. Romney issues pro forma applause lines about repealing Obamacare on Day 1, but that’s about all. And Obama barely mentions it at all. For my money, this is by far the biggest issue of the campaign, and it’s been nearly invisible.

So in a way, the 2012 campaign hasn’t been small. Both sides may have made a strategic decision to fight on other grounds, but Obamacare, all by itself, is about as big as things get these days. Even if an elephant in the room is invisible, it’s still an elephant.