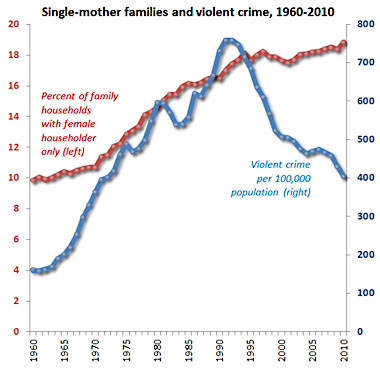 Philip Cohen notes today that homicide rates in Washington DC have plummeted over the past couple of decades. The city that used to be the murder capital of the world has seen murder rates fall by three-quarters. At the same time, the rate of single-motherhood has remained steady.

That’s surprising, because it was a big part of the story 20 years ago, when D.C. was the murder capital of the country during a national crime wave. I think single mothers—especially those who were raising their kids back in the 1990s—deserve an apology from the conventional-wisdom purveyors of that time.

….Violent crime has fallen through the floor (or at least back to the rates of the 1970s) relative to the bad old days. And this is true not just for homicide but also for rape and other assaults. At the same time, the decline of marriage has continued apace. Looking at two aggregate trends is never enough to tell a whole story of social change, of course. However, if two trends going together doesn’t prove a causal relationship, the opposite is not quite as true. If two trends do not go together, the theory that one causes the other has a steeper hill to climb. In the case of family breakdown driving crime rates, I don’t think the story will make it anymore.

And I’m open to explanations for why crime has really fallen, even including some minor role for the incarceration craze. But there were a lot of people who were not nearly so circumspect about the soundness of their causal stories when the family-breakdown-crime assumption served their ends. And it would be big of them to own up to it now.

Fascinating! As you can see in the chart above, the violent crime rate (which includes murder, rape, robbery, and assault) has an inverted U shape, so if we’re looking for something to explain both the rise and fall of crime, I suppose our first task would be to find something else with an inverted U shape. That wouldn’t prove all by itself that this was the cause of the change in crime rates, but it would certainly give us a starting point.

But what could it be? Cohen notes that since the Washington Post is no longer able to blame violent crime on family breakdown, it now attributes declining murder rates to “rising incomes, improved law enforcement technology and community relations, and better trauma care.” Maybe so. But just like single motherhood, those are all sociological explanations. I wonder if we should go further afield?