Earlier today, I argued that contrary to popular opinion, John Boehner has not agreed to raise more revenue as part of a deficit reduction plan. He’s rather vaguely said he might agree to this, but he’s steadfastly declined to produce any details. “I’ll believe Boehner is serious,” I said, “as soon as an actual proposal is on the table and both Eric Cantor and Paul Ryan say they’ve signed onto it.”

Well, good news! Today Boehner wrote a three-page letter to President Obama outlining his proposal. And it was signed by, among others, Eric Cantor and Paul 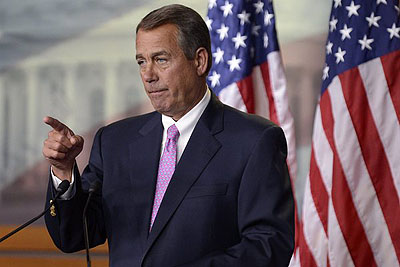 Ryan. So now we’re cooking. What does the letter say?

For starters, it’s not really a three-page letter. The first two pages are just some throat-clearing about how disappointed Republicans were in Obama’s initial proposal and how sweetly reasonable they plan to be in response. That response, however, turns out to be a grand total of two paragraphs long, and basically says they’re endorsing the “middle ground” plan that Erskine Bowles proposed on November 1 of last year. I looked far and wide for this plan, and as near as I can tell, it doesn’t really exist. The only record I could find was Bowles’ oral testimony before the supercommittee last year. Here it is:

On health care you are somewhere between $500 and $750 billion of additional health care cuts. I assumed that we could get to $600, and I got there by increases in the eligibility age for Medicare that I discussed with Senator Kerry when he was talking to me. That is about $100 billion. That would take you from the 500 where the Democrats are to $600 billion, and it happens to come not on the provider side, which I think would kind of balance that out.

On other mandatory cuts, you are somewhere between 250 and 400, so I settled on 300 there, and we had enough cuts in our plan to get you to 300 on the other mandatory….You agreed actually on CPI in your two plans of approximately $200 billion.

….That gets me to revenue. And on revenue I took the number that the Speaker of the House, I had read had actually agreed to, and I was able to generate $800 billion through revenue from the Speaker’s recommendation.

So that’s it. The only specific proposals there are increasing the Medicare eligibility age, which is a terrible idea, and changing the way inflation is calculated to slow down automatic spending increases. However, Boehner doesn’t appear to have included the inflation proposal in his letter, probably because it would affect tax brackets as well as Social Security benefits if it were implemented government-wide. Republicans have long championed adopting a new inflation calculation in order to reduce Social Security benefits, but they usually get cold feet when you suggest that if it’s good for Social Security, it ought to be good for everyone else too.

So what we’re left with is: $800 billion in revenue plus $1.2 trillion in spending cuts. But these are nothing more than numbers that Erskine Bowles pulled out of the air because they were in between some other numbers. They’re just vague goals.

Now, it’s true that Bowles thinks that closing deductions and loopholes is the way to go about raising revenue, and he even has a few suggestions along these lines. But that doesn’t matter. What matters is what Boehner & Co. are willing to sign up for, and Boehner’s letter makes it clear that Republicans also want to lower tax rates, which means they’d need to find way more deductions and loopholes than Bowles has ever proposed. So far, though, they’ve declined to make even a single concrete suggestion. Nor have they committed to genuinely raising revenue, as opposed to “raising” revenue via tax reform that will supposedly supercharge the economy and thereby increase tax payments automatically. Until they do, this is just hot air.

Am I being too cynical? Maybe. After all, Boehner has said that he’s willing to close loopholes and deductions. And maybe the details can only get hammered out behind closed doors, in order to keep the lobbyists at bay until both sides have an agreement. We’ll see. But I will remain cynically skeptical until the day that Boehner publicly proposes $800 billion in actual deductions and loopholes he wants to close. That day hasn’t come yet.

UPDATE: Jeez. Even Erskine Bowles doesn’t support the supposed “Bowles plan” in Boehner’s letter. I guess maybe Boehner should have checked with him first.

UPDATE 2: There’s nothing in Boehner’s letter about changing the way inflation is calculated, but all the news accounts I’ve read say that Boehner’s plan includes it. So maybe it’s there after all. I’m just not sure where.

UPDATE 3: Apparently, the inflation thing came during background briefings from anonymous GOP aides. Needless to say, this means no one is really standing behind it and it can be easily denied in the future if need be. Color me unimpressed until someone in the Republican leadership makes this proposal publicly. They could have put it in their letter pretty easily, after all.