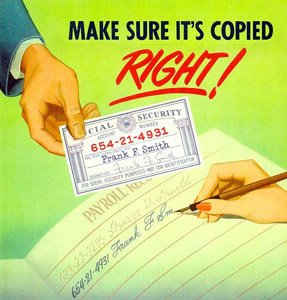 Does Social Security contribute to the deficit? Is the Social Security trust fund a fiction? I’ve taken a crack at explaining both of these things before, but I’ve never really succeeded. The truth is that it’s complicated. So today I’m going to try again. I figure I’m bound to hit on a formulation that makes sense eventually.

First things first: Social Security is funded via a payroll tax on all income up to $110,000. You pay 6.2 percent and your employer pays 6.2 percent. These numbers were set by the Social Security Reform Act of 1983, and for the next three decades payroll taxes provided more money than was needed to pay out benefits to retirees.

Now, suppose this surplus had been invested in corporate bonds. What exactly would that mean? It means that workers would be giving money to corporations, who would turn around and spend it. In return, the Social Security trust fund would receive bonds that represent promises to repay the money later out of the company’s cash flow. In effect, it gives workers a claim on the cash flows of the company at a later date in time. When that time comes, the company would have to pay up, which would make it less profitable. If the company was already unprofitable, it would make their deficit even worse.

If that’s what had happened, there would be no confusion about the trust fund. Everyone agrees that corporate bonds are real things, and that the corporations who sell them have an obligation to pay them back, even though it means less money for shareholder dividends.

Now let’s change a few words in this story. What actually happened is that the Social Security surplus was invested in treasury bonds. What does that mean? It means that workers gave money to the federal government, which turned around and spent it. In return, the Social Security trust fund received bonds that represented promises to repay the money 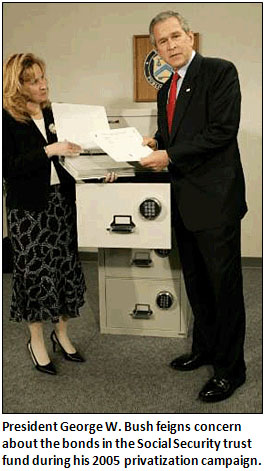 These two stories are identical. Treasury bonds are real things: They are promises to repay money at a later date out of the government’s cash flow. The federal government has an obligation to pay them back even if it has to raise income taxes to do it.

That’s where we are today. Payroll taxes are no longer enough to cover payments to retirees, so Social Security is cashing in the treasury bonds in its trust fund to make up the difference. Those bonds, which were purchased with the payroll taxes of workers, represent a promise of repayment from the income taxpayers of America, and that promise is every bit as real as a promise from the board of directors of a corporation. But the money is real too, which means that paying it back makes the federal deficit even worse than it already is. To cover that deficit, our only options are to either (a) raise income taxes or (b) sell new bonds to outsiders, thus increasing the net public debt.

UPDATE: Technically, it’s not correct that Social Security is cashing in treasury bonds. Not yet, anyway. The trust fund earns interest on its existing stock of bonds, and right now it’s taking part of its interest payments in cash (rather than more bonds) in order to make up the shortfall from payroll taxes. These interest payments are paid out of the general fund and thus affect the deficit. Within a few years, interest payments will no longer be enough to cover the shortfall and Social Security will start redeeming the treasury bonds in its trust fund.