From the LA Times today:

The average household already spends about $90 a month for cable or satellite TV, and nearly half of that amount pays for the sports channels packaged into most services.

I knew that sports programming accounted for a big chunk of my cable bill, but I had no idea the chunk was that big. And this is something that’s become suddenly more prominent here in Southern California. The Lakers just signed a big new contract that will swell my cable bill, even 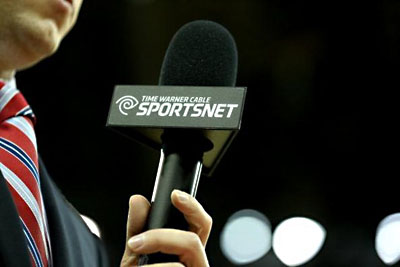 though I don’t watch basketball. Ditto for the Dodgers, even though I don’t watch baseball. And ditto again for the Pac-12 network, even though I watch maybe half a dozen Pac-12 sporting events a year. I watch enough sports that I don’t mind paying to get ESPN and a few other channels, but these new contracts are likely to add another ten bucks a month to my cable bill for channels I barely watch at all. The numbers are really getting ridiculous for those of us who are only casual sports fans. (And even more ridiculous for people like my sister or my mother, who don’t watch any sports.)

The obvious answer, of course, is to offer channels on an a la carte basis—or perhaps on a semi-a la carte basis—but both the content providers and the cable companies fight this tooth and nail. Here’s the excuse:

National and local sports networks typically require cable and satellite companies to make their channels available to all customers….The idea of offering channels on an “a la carte” basis used to be sacrilege to the industry. Executives argued it would not lower prices because networks would just charge more to make up for the loss of subscribers.

You know what? That’s exactly what would happen. People would start to understand just how much they’re paying for sports programming and they’d be appalled. Many wouldn’t subscribe, and sports fans would be forced to pay the actual cost of their sports programming without being subsidized by the rest of us. This is exactly how it should be. There’s no reason that, for all practical purposes, every single person in the LA area should be forced to pay a tax to the Lakers and Dodgers even if they don’t care about basketball and baseball.

Consumers should always assume that they’re being ripped off if prices are hidden in some way. In the same way that hidden bank fees are generally good for banks but not so good for the rest of us, the current cable TV system is great for sports providers because it dulls the edge of market discipline, but not so good for the rest of us. The end result of a la carte programming would be more competition between sports providers, which would force them to offer better products, and it would also (probably) result in less money flowing into pro and college sports, which would be an almost unalloyed good. And people like my mother wouldn’t be forced to pay $400 per year for programming they have no interest in, merely as the entry fee for having cable TV at all. It’s time for a revolt, people.