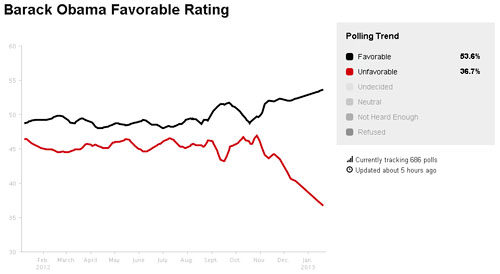 It’s not just the return to Clinton tax rates for the very wealthy; it’s a real cultural shift as well. In the last week, we have seen the Boy Scouts back off a national policy of excluding openly gay scouts and scout-masters (which means the Mormon hierarchy must have not made too big a fuss); we have Tom Tancredo almost smoking a joint in public (don’t make a bet with him on anything in the future); we have Sean Hannity’s ratings plummeting; we see gay couples included in the president’s comprehensive immigration reform; we have Limbaugh edging ever-so-slightly toward Rubio on immigration.

That chart does surprise me. Not because Obama’s favorables are up five points. That seems like fairly standard inaugural honeymoon stuff. But his unfavorables are down ten points. Some of that is honeymoon stuff too, and it will wash out soon enough. Still, it’s a big drop, and it suggests that maybe a bit of the fever has broken on the right. Maybe.

In any case, this is why immigration reform needs to happen soon if it’s going to happen at all. And as near as I can tell, it’s all in Marco Rubio’s hands now. If he can persuade enough Republicans to take a deep breath and support a compromise measure—and if he can keep the conservative punditocracy from flipping out over it—it has a good chance of passing both Senate and House. If not, probably not. I don’t think McCain and Graham can do it on their own.