One of the great liberal hopes of 2013 was that Harry Reid would pull the trigger on filibuster reform and return to the Jimmy Stewart talkathons of Hollywood legend. Well, it’s not going to happen. Rather than use the “nuclear option” to pass filibuster changes on a party-line vote, 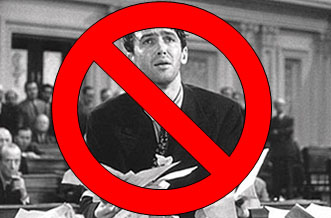 Reid has reached an agreement with Mitch McConnell for a bipartisan reform. Sam Stein and Ryan Grim have the details:

The deal would address the filibuster on the motion to proceed, which had regularly prevented the Senate from even considering legislation and was a major frustration for Reid. The new procedure will also make it easier for the majority to appoint conferees once a bill has passed, but leaves in place the minority’s ability to filibuster that motion once — meaning that even after the Senate and House have passed a bill, the minority can still mount a filibuster one more time.

Reid won concessions on judicial nominations as well. Under the old rules, after a filibuster had been beaten, 30 more hours were required to pass before a nominee could finally be confirmed. That delay threatened to tie the chamber in knots. The new rules will only allow two hours after cloture is invoked.

There’s a bit more to make post-cloture debates a little more onerous for the minority, but this is about it. Instead of three chances to filibuster, the minority party will now be able to filibuster only twice (once when the bill comes to the Senate floor and a second time after the final conference report comes to the floor). [See update 2 below.] In addition, once a filibuster is broken on a judicial nomination, the minority party can waste only two hours of floor time, not 30. [See update 1 below.]

So did Harry Reid cave? Could he have gotten more by ignoring McConnell and passing a more robust reform with just Democratic votes? Maybe. But I think David Atkins is right:

Despite Senators Udall’s and Merkley’s bold claims, it has never been entirely clear that there were ever a full 51 votes for real reform. So it’s possible that Harry Reid, rather than subterfuging Democrats, is instead counting votes and playing his best hand.

….But the most important outcome is the realization that while we aren’t quite there yet, the newer crop of Democrats like Merkley and Udall is far better than much of the old guard responsible for abetting and supporting the broken system. We’re only a few retirements and progressive primaries away from a Democratic Senate majority progressive enough to make the necessary changes.

The sad truth is that Democrats only have 55 votes in the Senate, and there were almost certainly more than five Democratic senators who just weren’t willing to give up the filibuster. Partly this is because they want it in place in case Republicans ever get back into power, and partly it’s because they themselves don’t want to give up the personal privileges associated with the filibuster.

This is a pretty tiny step. But for now, anyway, we simply don’t have a strong enough Democratic Party to get more than this. Maybe someday.

UPDATE 1: Apparently this is an even tinier step than I thought. Dave Weigel reports that the 2-hour limit on judicial nominations applies only to district court nominees, not to the more important appellate court nominees.

Now that we have the details in front of us, it’s pretty clear that this deal accomplishes almost nothing. A few scraps have been thrown to reformers, but that’s all.