In Steven Brill’s monster health care article in Time this week, he argues that hospital executives are overpaid but doctors aren’t. If we paid Medicare rates for all medical services, he says, “no doctor could hope for anything approaching the income he or she deserves.” Felix Salmon pushes back:

Weirdly, in 24,000 words which include a lot of railing against the large salaries enjoyed by hospital executives, Brill never supports or clarifies this assertion: he never says how much money doctors deserve, how much they actually make, or how high physician salaries would need to be in order to make future doctors want to practice. That last one, in particular, seems very unconvincing to me: the world is full of highly-qualified doctors who would love to be able to practice in the U.S. for much less than the current going rate.

In his conclusion, Brill says—again, without adducing any evidence whatsoever—that “we’ve squeezed the doctors who don’t own their own clinics, don’t work as drug or device consultants or don’t otherwise game a system that is so game able”. It’s a bit weird, the degree to which Brill cares so greatly about keeping doctors’ salaries high: he certainly doesn’t think the same way about teachers.

You’d really like to see some data on this score, wouldn’t you? Well, here it is. The two charts below are from an OECD report that compares the average remuneration of GPs and specialists in a selected set of countries. The data is from 2004, and the figures are in PPP-adjusted dollars: 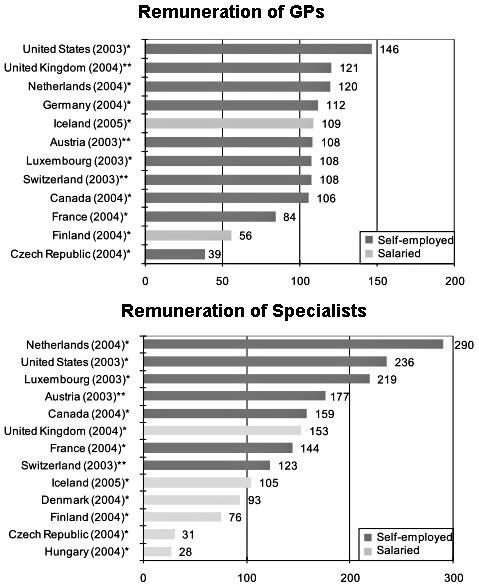 The bottom line is that compared to other rich countries—all of which pay Medicare rates or less for medical services—American doctors are pretty well paid. The report also shows compensation as a ratio of the average wage in each country, and the story is similar (though GPs look a little closer to the OECD average when you compare their pay to average wages).

So is this more or less than US doctors “deserve”? On that score, it’s worth pointing out that most American doctors have to pay their own medical school bills, a cost that’s picked up by the government in most other countries. Despite that, it’s a little hard to argue that American doctors, especially specialists, have been squeezed to the breaking point. I too would be interested in seeing Brill back up that contention.