Paul Waldman argues that if any kind of gun regulation passes in the near future, the NRA will have only itself to blame:

They’ve become more extremist in the last two decades, but most people didn’t realize it, because unless you’re a member and are getting their magazines and emails or seeing their representatives appear at conventions, you had no idea just how extreme they’d become. So the idea that the NRA is just the guardian of Americans’ gun rights could persist. An average gun owner who saw that the NRA endorsed a candidate could say, whatever else he thought of that candidate, “I suppose he’s all right when it comes to guns.”

But now that Wayne LaPierre has been appearing on television shows, the whole country has gotten to see just what a maniac he is, and how extreme the organization has become. And now that there are concrete proposals on the table, voters can see that the NRA will oppose even universal background checks, which every opinion poll taken in the last couple of months has shown are supported by an astonishing 90 percent of the public. When even the host 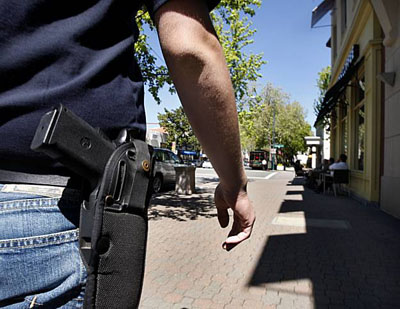 of Fox News Sunday is calling your arguments “ridiculous” and “nonsense,” you’ve got a problem.

I find this a very congenial view, but I’m curious about whether it’s actually true. To me, of course, Wayne LaPierre’s spittle-flecked performance last December was dramatic evidence of just how crazy the NRA has gotten. But how many people saw it? And how many people interpreted it the same way I did? I’m not really sure about that. Not many people watch press conferences or congressional hearings on C-SPAN, and the ones who do mostly have their minds already made up.

So….I’m not sure about this. Still, I hope it’s true, because the evolution of the NRA over the past decade or two has been truly hair-raising. Tim Dickinson gets at some of this in “The NRA vs. America,” his long-form look at the NRA’s growing business connections to the gun industry, but I think there’s still a good piece to be written about the cultural evolution of the NRA as well.

Over the past 20 years, fueled by paranoia over Ruby Ridge and Waco and aided by the rise of assault weapon fetishization, the NRA has gotten almost insanely aggressive. In the past, they were a single-minded lobby out to protect your right to own a gun: zealous and unbending, but with a fairly limited set of goals. However, since the mid-90s—and accelerating after the Supreme Court finally codified gun ownership rights once and for all—they’ve gone far, far beyond this. Conspiracy theories about the UN coming to take away your guns run rampant in NRA literature. They now insist not just that guns help you defend yourself, but that widespread ownership actively reduces crime. What’s more, merely defending gun ownership is no longer enough. Not by a long way. Today the NRA fights fanatically for the expansion of shall-issue laws, concealed carry laws, unconcealed carry laws, stand your ground laws, and a bevy of laws that would all but remove the right of private property owners to ban guns on their own premises. They want guns in schools, guns in bars, guns in the workplace, guns everywhere. The result is squadlets of morons marching around shopping malls with AR-15s slung over their shoulders, causing total panic, just to show that, by God, no one can deprive them of their 2nd Amendment rights.

That’s the story I’d like to read. How and why did the NRA morph from merely defending gun ownership to actively demanding that guns should be displayed everywhere, at all times, and largely as a means of defending yourself from the state? Has someone already written the definitive piece on this subject, or is it still awaiting its Boswell?