There aren’t many people who believe that Dodd-Frank really and truly solved our financial system problems. But it doesn’t matter. Exhaustion has taken over, and there’s essentially no energy to take another run at the problem. For better or worse, bank regulation is finished for the time being.

Or is it? Today, David Dayen reports that there’s a growing movement to address the problem of Too Big To Fail banks once and for all. Surprisingly, it’s coming not just from firebrands on the left, but from tea party types on the right, who are convinced that government 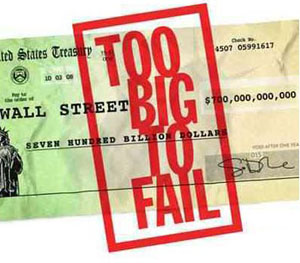 The new surge of interest in ending Too Big to Fail on the right has converged with an existing effort on the left, and it’s translating into legislative action. Sherrod Brown, the populist progressive senator who just won re-election in Ohio, has been discussing solutions to the mega-bank problem with up to ten Republican senators. Against all expectations, his main partner is David Vitter, a Republican and fellow member of the Senate Banking Committee. “I looked across the committee room one day, he was questioning [Treasury Secretary] Ben Bernanke,” said Brown in an interview about his Republican colleague. “He was really tough on higher capital standards. I figured he could be an ally, he did have a concern that banks were too big, too economically powerful and too politically powerful.”

The unlikely duo began working several months ago. They started by urging the Federal Reserve and other regulators to use their power to increase capital standards on the largest banks, which typically deal in riskier activities and therefore require more of a backstop.

….At the end of February, Brown and Vitter announced they would work on legislation to incorporate much of the thinking about how to deal with runaway banks. Brown tried this once with an amendment to Dodd-Frank with Senator Ted Kaufman that would have capped mega-bank assets to a percentage of GDP. It received 33 votes in 2010, with only 3 Republicans supporting. Brown’s discussions with colleagues leave him thinking Brown-Kaufman could get at least 50 votes today, and the bipartisan nature of the Brown-Vitter effort could mean that whatever results will have an even better chance at broad support. In a floor speech announcing their joint effort, Vitter said, “I don’t know if we quite define the political spectrum of the United States Senate, but we come pretty darned close. And yet, we absolutely agree about this threat.”

Oddly enough, I’m probably more in sync with the conservative Vitter than the liberal Brown. I favor breaking up big banks, but despite this supposedly newfound fervor on the right, I doubt that it has any chance of happening. It’s just too big a task. But I’ve long been a supporter of significantly higher capital standards, something that’s easier to enforce and, perhaps, slightly more likely to pass Congress. It wouldn’t solve every problem that breaking up banks would, but on the other hand, it might do more to make them stable. Big capital cushions are, by a mile, the cleanest, simplest, most reliable way of (a) keeping banks safe and (b) making sure they can survive on their own if they do fail.

Either way, though, this is good news. I’ve always figured that Dodd-Frank and Basel III were basically our only shots at fixing the financial system, and once they were done, they were done. There was just no appetite to revisit them. That’s still the smart way to bet, but there may be a slighly brighter ray of hope on this front than I thought.