Henry Farrell is happy that Daron Acemoglu and James Robinson are now arguing that economists need to think harder about politics, because if they did they’d see why unions are often well worth any deadweight cost. Here are Acemoglu and Robinson:

Faced with a trade union exercising monopoly power and raising the wages of its members, most economists would advocate removing or limiting the union’s ability to exercise this monopoly power, and this is certainly the right policy in 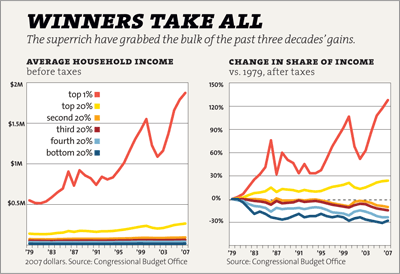 some circumstances. But unions do not just influence the way the labor market functions; they also have important implications for the political system.

….Because the higher wages that unions generate for their members are one of the main reasons why people join unions, reducing their market power is likely to foster de-unionization. But this may, by further strengthening groups and interests that were already dominant in society, also change the political equilibrium in a direction involving greater efficiency losses. This case illustrates a more general conclusion, which is the heart of our argument: even when it is possible, removing a market failure need not improve the allocation of resources because of its impact on future political equilibria. To understand whether it is likely to do so, one must look at the political consequences of a policy: it is not sufficient to just focus on the economic costs and benefits.

I’m happy to read this because, like most normal human beings, I like it when smart people confirm my existing beliefs. Here’s my version of the same argument, from a piece a couple of years ago about the death of organized labor as a mass movement:

This has produced three decades of commercial and financial deregulation that started during the administration of a Democrat, Jimmy Carter, gained steam throughout the Reagan era, and continued under Bill Clinton. There were a lot of ways America could have responded to the twin challenges of ’70s-era stagflation and the globalization of finance, but the policies we chose almost invariably ignored the stagnating wages of the middle class and instead catered to the desires of the superrich: hefty tax cuts on both high incomes and capital gains. Deregulation of S&Ls that led to extensive looting and billions in taxpayer losses. Monetary policy focused excessively on inflation instead of 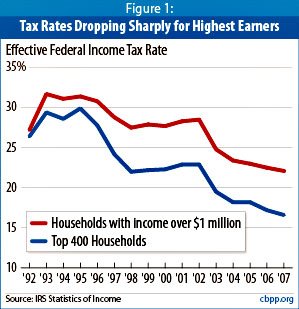 employment levels. Tacit acceptance of asset bubbles as a way of maintaining high economic growth. An unwillingness to regulate financial derivatives that led to enormous Wall Street profits and contributed to the financial crisis of 2008.

….It’s impossible to wind back the clock and see what would have happened if things had been different, but we can take a pretty good guess. Organized labor, for all its faults, acted as an effective countervailing power for decades, representing not just its own interests, but the interests of virtually the entire wage-earning class against the investor class.…If unions had been as strong in the ’80s and ’90s as they were in the ’50s and ’60s, it’s almost inconceivable that they would have sat by and accepted tax cuts and financial deregulation on the scale that we got. They would have demanded economic policies friendlier to middle-class interests, they would have pressed for the appointment of regulators less captured by the financial industry, and they would have had the muscle to get both.

I always wished that this piece had gotten a little more attention, mainly because my conclusion was different from Acemoglu and Robinson’s (and Farrell’s). I agree with just about everything they say about the value of unions, but I also feel forced to acknowledge that it doesn’t matter. As a truly powerful mass movement, unions are dead and they aren’t coming back. This has left a gaping hole in American politics: Corporations and the rich continue to have enormous institutional power, while the working and middle classes have almost no one to speak for them.

I figure that filling this hole is the most important problem the left has to address over the next decade or so. Unfortunately, I don’t know how. What kind of mass movement with truly powerful institutional support can take the place of unions?

Double-plus unfortunately, I think the reason my piece got so little attention is because no one else knows either. Why bother responding if you don’t have an answer? Maybe Acemoglu and Robinson can do better.