I’ve written before about my belief that something happened to the economy around the year 2000. A whole bunch of different measures seem to have inflected right around then, and although the subsequent declines were partly masked by the housing bubble of the aughts, they were happening all along. When the Great Recession hit, a decade’s worth of decline was telescoped into a couple of years.

Via Arnold Kling, a trio of researchers have a new paper out that points to yet another thing that appears to have suddenly inflected right around 2000: the demand for high-skill workers. Here’s their key finding:

In Figure 12 we plot the fraction of individuals aged 18-65 employed in occupations that require substantial cognitive skills….This ratio increased substantially from 1980 to 2000, and then it appears to reach a plateau 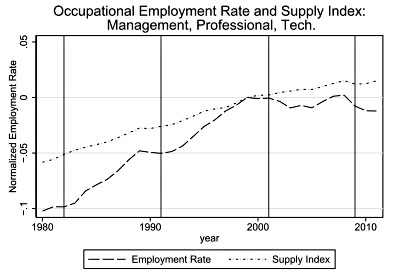 over the period 2000-2010. On this ?gure, we also report a (per capita) supply index for cognitive occupations.

….There are two key features of Figure 12 that we wish to highlight. First, from 1980 to about 2000, employment in cognitive jobs grew faster than the supply index, suggesting that demand for cognitive tasks outstripped supply. In contrast, after 2000, the supply index continued to grow at a similar rate as in the pre-2000 period, but cognitive employment stalled. We interpret these trends as suggesting that demand for cognitive jobs likely decreased over this second period.

The authors explain that the college premium for workers remains high regardless of this, because educated workers are simply getting pushed down the employment ladder, where they’re performing more routine jobs. But many routine jobs are disappearing too, so workers in these occupations are getting pushed down too. A degree may not be as valuable as it once was, but relative to not having a degree, it’s still pretty valuable.

But back to the original point: what happened starting around 2000 that could have dampened our previously growing demand for high-skill workers? The authors don’t try to guess, but I will: steadily improving automation. More on this later.