This is from the Wall Street Journal today:

Michael Feroli, chief U.S. economist for J.P. Morgan, estimates that since the recession, the worker flight to the Social Security Disability Insurance program accounts for as much as a quarter of the puzzling drop in participation rates, a labor exodus with far-reaching economic consequences.

Is this true? I don’t know: as I type this, I haven’t looked at the numbers yet. So let’s look!

In 1985, the Social Security Administration forecast that 7.6 million workers would be receiving disability payments in 2009. The actual number turned out to be 7.8 million. So that’s our baseline: we started out 183,000 higher than forecast.

The original forecast for 2012 was 8.5 million. The actual number turned out to be 9.4 million. That’s a difference of 885,000. Subtract the baseline number, and the unexpected spike since the recession has been 702,000 workers. 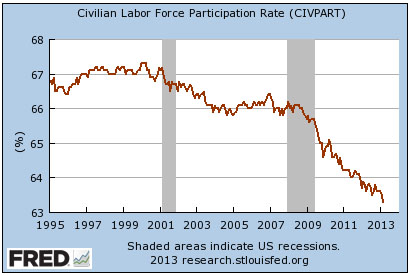 of 3 million. So Feroli’s contention is plausible: the upward spike in disability awards might account for about a quarter of the post-recession downward spike in labor participation.

That’s not a sure thing, since he might have the causality backward. It’s equally likely that other factors forced the labor participation rate downward, and workers who found themselves with little prospect of ever getting a job were more aggressive about applying for disability coverage. In fact, I find that explanation more likely. Nonetheless, I promised myself I’d post the results of this crude analysis regardless of what they showed, so here they are.

For more, see my post this weekend about the rise in disability payments, which has become a huge topic of discussion ever since that Planet Money story a few weeks ago. Nickel summary: it’s true that disability awards have spiked upward a bit since the recession, but generally speaking, the increase in disability recipients since 2000 has nothing to do with massive waves of cheating or indolence. The vast majority of the growth was predicted way back in 1995 using simple demographic projections, and we’ve followed the predicted path ever since. There’s really only a very small story here.