Thanks to the opening of his presidential library, this is officially “Be Nice to George Bush Week,” and we’ve had quite a few entries in an ongoing competition among conservatives to persuade us that Bush was really a whole lot better than we used to think he was. One of the most widely linked is an essay by Keith Hennessey titled “George W. Bush is smarter than you.”

And that may well be. I always thought Bush was a reasonably smart guy, and anyway, above a certain level it doesn’t matter much. Other character traits become a lot more important. Still, Hennessey is trying to convince us that Bush is really, really smart, and I’m afraid I remain unconvinced. Here are three examples he provides to demonstrate Bush’s high IQ:

[He] was incredibly quick to be able to discern the core question he needed to answer. It was occasionally a little embarrassing when he would jump ahead of one of his Cabinet secretaries in a policy 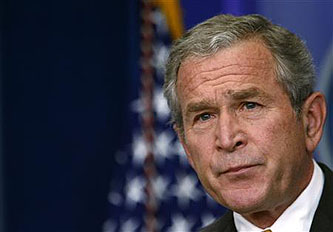 discussion and the advisor would struggle to catch up.

….We treat Presidential speeches as if they are written by speechwriters, then handed to the President for delivery. If I could show you one experience from my time working for President Bush, it would be an editing session in the Oval with him and his speechwriters. You think that me cold-calling you is nerve-wracking? Try defending a sentence you inserted into a draft speech, with President Bush pouncing on the slightest weakness in your argument or your word choice.

….On one particularly thorny policy issue on which his advisors had strong and deep disagreements, over the course of two weeks we (his senior advisors) held a series of three 90-minute meetings with the President. Shortly after the third meeting we asked for his OK to do a fourth. He said, “How about rather than doing another meeting on this, I instead tell you now what each person will say.” He then ran through half a dozen of his advisors by name and precisely detailed each one’s arguments and pointed out their flaws. (Needless to say there was no fourth meeting.)

This is really unpersuasive. The first example suggests not smarts, but impatience. Bush always thought of himself as a conviction politician, so it’s natural that he’d frequently want to skip the policy details and instead focus exclusively on what he considered the “core” question.

The second example doesn’t even come close to demonstrating smarts. It demonstrates, once again, impatience. Bush is the kind of guy who wants to say what he wants to say, and he doesn’t want a speechwriter trying to twist his words or add some nuance he’s not interested in.

The third example—surprise!—also demonstrates impatience (justifiably, it sounds like). In this case, Bush has been in three meetings over the course of two weeks, and his advisors are wrangling over the same issues again and again and again without making any progress. So he’s tired of it. He repeats their arguments back to them, says he doesn’t need to hear them yet again, and heads off to make a decision.

None of this suggests that Bush is a dumb guy. But it doesn’t demonstrate a ton of analytical depth either. It suggests that (a) he has a good memory, (b) he’s perfectly able to understand policy arguments when he wants to, but (c) most of the time he had little patience for this stuff and instead simply wanted to do what his political instincts told him to do. He’s smart enough, but his intellectual curiosity was limited, and his willingness to allow his instincts to be overridden by policy concerns was minimal.

Maybe you think that’s good, maybe you think it’s bad. But it is what it is. There’s really no need to pretend that Bush was some kind of unappreciated intellectual superman.