The LA Times reports today that the superintendent of Yellowstone Park, in a last ditch effort to deal with budget cuts caused by the sequester, decided to delay snowplowing for two weeks, a savings of about $400,000. Local 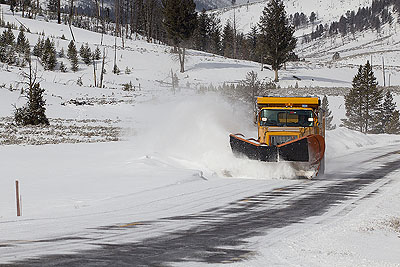 businesses, afraid that this would hurt the tourist trade, decided to band together and pay for the snowplows themselves. But they aren’t happy about it:

It’s not that residents don’t want to reduce the deficit. Washington needs “to grow the economy, not the government,” said Jay Linderman, who owns an Italian restaurant on Cody’s main drag and grudgingly gave $200 to pay for plowing. What rankles locals is the indiscriminate nature of the sequester, which cut programs across the board without weighing individual merits.

But therein lies the perennial rub: Cuts that are welcomed in the abstract are not always appreciated when they hit home. And everything the government does, however small, touches somebody. “You pay your taxes to get certain services,” said Bruce Eldredge, executive director of the Buffalo Bill Historical Center, a world-class museum in the center of town, which delivered a $10,000 check to the chamber. “We would, I think, probably argue as a community that we pay our federal taxes to make sure the park is open at a specific time.”

In particular—and please excuse the wild guess here—I imagine that most people who have a serious jones for cutting federal spending are really only interested in cutting spending on poor people. Cutting other services just isn’t what they signed up for. It’s the Obamaphones and the food stamps that are wasteful, not the Yellowstone snowplows and small town air traffic controllers. This is why I’ve always been a little surprised that when the sequester was originally negotiated, Republicans agreed to exempt (or treat specially) a whole bunch of mandatory means-tested programs, including unemployment benefits, student loans, community health centers, EITC and other refundable tax credits, CHIP, disability, school lunches, TANF (traditional “welfare”), Pell grants, Medicaid, and SNAP (food stamps). Those are the programs that their base really wants to see cut, but for some reason Republicans agreed to mostly leave them untouched.

Anyway, reading this Yellowstone story reminded me that I’ve never seen a good account of how Obama managed to bamboozle Republicans into agreeing to this. Does anybody know of one?