The Kermit Gosnell story is truly breathtaking. There are, of course, the actual crimes Gosnell is charged with, which are appalling all on their own. Gosnell was a rogue abortion doctor who (it’s alleged) ran a hideously deadly clinic in Philadelphia, and remained open for years before local authorities did anything to shut him down. The details are gruesome to report and stomach-turning to read about.

And then there’s the media angle. When a grand jury report on Gosnell’s conduct was released in 2011, it got a smattering of national coverage and then dropped off the radar. On March 18 of this year, Gosnell’s trial started. It got plenty of coverage in Philadelphia, as well as on some activist websites, but not much elsewhere.

That is, it didn’t get much coverage until conservatives decided they could make hay with charges that the story was being deliberately suppressed by the liberal media. To see the way this hustle works, consider how the 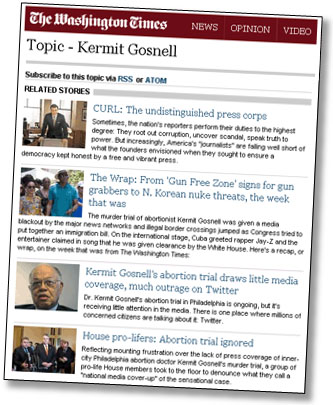 conservative Washington Times has handled the Gosnell case so far.

On March 18, they ran an AP dispatch about the start of the trial. Since then, they haven’t published a single additional piece. However, they have published the following:

And that brings us to today. Adding it all up, we have a grand total of one story about the trial itself and seven stories complaining that other media outlets aren’t covering the trial. It’s pretty obvious what the priorities are here, and, as Paul Farhi reports, the Washington Times is hardly alone:

The Weekly Standard and the National Review, two leading conservative magazines, for example, hadn’t published anything on the trial, according to a search of the Nexis database.1 The New York Post’s conservative editorial board has written one commentary — an editorial lamenting the lack of coverage, which, although it doesn’t mention it, includes its own paper.

We can add to that the Wall Street Journal’s conservative editorial page, which hasn’t mentioned it yet. And Alex Seitz-Wald reports that Fox News has run “brief updates on the trial in its roundup of the day’s news on several nights over the past month,” but that’s about it for its news programs.

Why hasn’t the Gosnell trial caught on nationally? Beats me. I’ve often wondered just what it is that causes some local crime stories to become media sensations and others to molder in obscurity. But the interest of the conservative press is pretty obvious, and it has little to do with the grisly nature of the case itself. After all, they’ve been well aware of the Gosnell trial all along, because both Breitbart.com and conservative pro-life sites have been covering it extensively. Despite this, they barely mentioned it themselves. Obviously, even conservative editors didn’t it consider it newsworthy on a national scale. Their outrage only kicked into high gear when they spied an opportunity to pretend that this was a story about the liberal media ignoring a grisly abortion story. And according to Farhi, it’s working:

The media appears to be responding to the criticism. CNN devoted multiple segments to the story Friday. CBS said it plans two segments and MSNBC will discuss the trial on its “Morning Joe” program Monday. The Post ran a full AP report on it in Saturday’s editions; the paper has also assigned its own reporter to cover the trial in Philadelphia this week.

“We talked about the story during the day on Friday and decided that, in fact, the story warranted our staff attention because of the seriousness and scope of the alleged crimes and because this was a case that resonated in policy arguments and national politics,” said [Post executive editor Martin] Baron. “In retrospect, we regret not having staffed the trial sooner. But, as you know, we don’t have unlimited resources, and . . . there is a lot of competition for our staff’s attention.”

I’m not really outraged by conservatives working the refs like this. Both sides exploit tragic events for their own benefit. That’s politics. But I sure hope the media itself understands just how zealously they’re being worked.

1The Standard finally included a piece on the Gosnell trial in its current issue. Its subject? The fact that the national media hasn’t been reporting on it.