In the Washington Post today, Karen Tumulty writes about the latest conservative pet rock: Obamaphones. The actual name for the program in question is “Lifeline,” which uses fees added to telephone bills to provide discounts on phone service for poor people. It began in 1984 under Reagan, was expanded to cover cell phones in 1996 under Clinton, and was 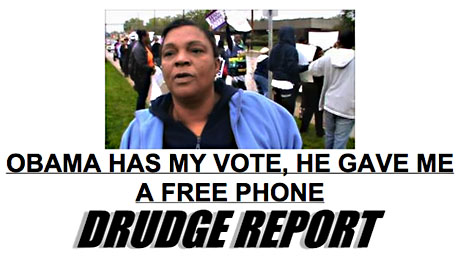 Lifeline made its way onto the radar screens of the right with an anonymous e-mail, which began circulating in 2009. It warned that free “Obama phones” were being given to welfare recipients, along with 70 minutes of service a month. “The very foundations that this country was built on are being shaken,” the e-mailer wrote.

From there, the conspiracy theories sprouted. Conservative talk radio last year was abuzz with speculation that “Obama phones” had become a means for the president’s tech-savvy reelection campaign to get poor people and minorities to vote.

Some of it was fueled by a video of an Obama supporter that went viral about six weeks before the election and has been viewed almost 8 million times. “Everybody in Cleveland, low minority got Obama phone,” a woman yells on the video. “Keep Obama in president, you know? He gave us a phone.”

That narrative has lived on for some Obama critics as an allegory that explains the president’s worldview. “The president offers you free stuff, but his policies keep you poor,” Sen. Rand Paul (R-Ky.) said in the tea party response to Obama’s State of the Union address. “For those who are struggling, we want to you to have something infinitely more valuable than a free phone.”

And it has become woven into the current fiscal arguments. House Speaker John A. Boehner (R-Ohio) tweeted on Feb. 19: “Nobody should be talking about tax hikes when govt is spending taxpayer dollars on free cell phones.”

What I really want is the Dave Weigel version of this story. The whole Obamaphone thing has been circulating practically since Obama took office. So why is it that it suddenly got legs just last year? Is it purely an election-related thing? But if that’s the case, why did it continue to have legs after the election, finally getting mainstream attention from the likes of Rand Paul and John Boehner?

One possibility is that it’s mostly advertising-driven. Not political ads, but aggressive marketing from cell phone companies making a buck off the Lifeline service:

TracFone was the first carrier the FCC approved to offer free cell service, instead of just discounted service, as the Associated Press reported on August 15, 2008….Soon, a whole bunch of other wireless carriers got in on the program — by 2010, Virgin Mobile, Verizon, Sprint, i-Wireless, Head Start, Consumer Cellular, Midwestern Telecom, Allied Wireless, and others had free phone plans. That’s why you can find all these “free cell phone” websites that look kind of shady, like Obamaphone.net or FreeGovernmentCellPhones.net.

….TracFone spokesman Jose Fuentes told Bloomberg in February, “We’ve had a lot of fly-by-night companies come in.” Fuentes estimated that more than 1,700 wireless companies were part of Lifeline. Between 2008 and 2012, the number of people with Lifeline phones grew from 7.1 million to 12.5 million. These companies may be fly-by-night at providing cell phone service, but they are pretty good at marketing, and as the rush of merchandise tied to his inauguration showed, Obama’s name seems to move product. But they could have chosen another hook. Reaganfreedomphone.com is still available if you want to try to reach out to the Fox News demo.

I guess the chronology makes sense. TracFone starts the prepaid gold rush in 2008, and in 2009 the weirdo conspiracy theories sprout up. The aggressive marketing, however, begins around 2011 and into 2012, and that’s when people really start to notice. Ironically, it’s also exactly the time when the FCC started up an investigation designed to rein in fraud in the Lifeline program. But irony isn’t a highly prized commodity in Washington DC, and politicians make hay with whatever’s at hand. So Obamaphones got a second lease on life.

I guess. But I still want to hear Dave Weigel’s take on this.