Last week I blogged about a Planet Money story on the steady increase in Social Security disability payments over the past couple of decades. The story was more nuanced than I think its critics gave it credit for, but there’s no question that the big takeaway for most people was the notion that lots of workers with only minor disabilities are being allowed into the program simply because the economy is bad and they probably can’t find work after they’ve been laid off.

Friday night this was a topic of discussion on the Chris Hayes show. One of the guests was Michael Astrue, a former commissioner of the Social Security Administration, and it’s fair to say that Astrue was pretty exasperated about the whole affair. One of the points he made was this: Nothing has skyrocketed. Nothing has suddenly spiraled out of control. The program today is spending exactly as much as it was forecast to spend back in 1994, the last time Congress revised the disability law.

That struck me as a pretty strong argument. If we really are exactly in line today with the predictions made 20 years ago, then obviously nothing is out of control. So I checked. I pulled up the 1995 trustees report and the 2012 trustees report and compared the 1995 forecast with the 2012 reality. Here’s what it looks like: 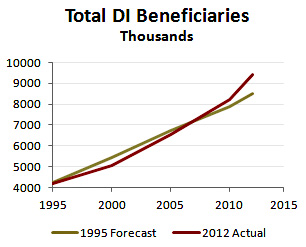 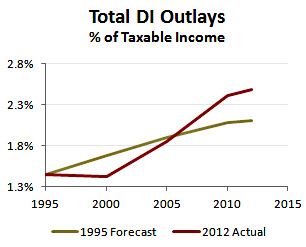 Astrue is pretty much correct—though not entirely. In 2012, there were about 10 percent more people receiving disability than was forecast in 1995. Total outlays were about 18 percent higher than forecast.

That’s not nothing, but it’s not a lot, either. There are two things going on. First, ever since 2000 the number of beneficiaries has been growing slightly faster than the original 1995 forecast. Second, there was a small extra spike starting in 2009, probably due to the Great Recession. This partly vindicates the Planet Money story, which suggested that (a) standards had loosened a bit over time, and (b) people who otherwise might have gutted it out and returned to work in better times decided to go on disability instead when jobs became scarce.

However, it doesn’t vindicate it very much. These factors have been responsible for only a small extra blip in the number of people approved for disability payments. The blip in outlays is a bit bigger, but that’s mostly a mirage: the recession reduced taxable income below forecast, which artificially inflates the outlay figure because it’s calculated as a percentage of income. By far the majority of the growth in the disability program has been due to simple demographics (as the boomer generation ages, more of them go on disability), and it was baked into the forecast two decades ago. We shouldn’t act shocked now that the forecast is coming true.