Are you tired of Benghazi! Me too. But today, Bob Somerby points me toward an intriguing little tidbit that I either missed or never knew about.

As you know, one of the key criticisms coming from Republicans is that Susan Rice, in her Sunday show appearances after the Benghazi attacks, wrongly blamed the violence on anger over the “Innocence of Muslims” video. As it happens, she didn’t actually do that, but 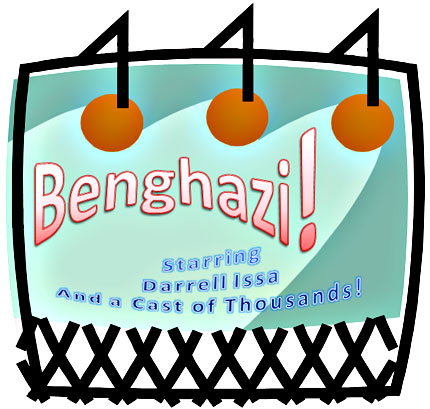 she did say that the Benghazi attacks began as a “copycat” of the Cairo demonstrations the same day, which themselves were based on anger over the video. Still, why did she do even that? Wasn’t it obvious that these were preplanned Al Qaeda terrorist attacks?

In the past, I’ve pointed to a New York Times piece written a month after the attacks that reported from the ground in Benghazi. And the Times piece says that residents of Benghazi did indeed believe that the video played a role: “To Libyans who witnessed the assault and know the attackers, there is little doubt what occurred: a well-known group of local Islamist militants struck the United States Mission without any warning or protest, and they did it in retaliation for the video.”

But hey—that’s the New York Times, well-known liberal apologist for the Obama regime. What do more reliable media reports have to say? Well, here’s Guy Taylor of the conservative Washington Times, writing on the day after the Benghazi attacks:

Speculation surged Wednesday through Washington’s foreign policy and diplomatic communities about whether the attack in Benghazi was the result of a long-planned attack by a terrorist group, perhaps with al Qaeda ties.

Officials at the White House and the State Department offered few details of their investigation. But in telephone interviews with The Washington Times, several residents in Benghazi said there had been two distinctly different groups involved in the assault on the U.S. diplomatic post.

The residents described a scene that began as a relatively peaceful demonstration against a film produced in the United States that had been deemed insulting to the Prophet Muhammad.

The situation did not turn violent until a group of heavily armed militants showed up and “hijacked” the protest, the residents said. The original group of protesters was joined by a separate group of men armed with rocket-propelled-grenade launchers.

In hindsight, this appears to have been wrong. But at the time, this was what people actually in Benghazi were reporting. Beyond that, every single quote from an administration source in Taylor’s dispatch suggests that (a) the battle scene was chaotic and (b) everyone is still trying to piece together what actually happened. This one is typical: “We frankly don’t have a full picture of what may have been going on outside the compound walls before the firing began,” said one senior Obama administration official.

Bottom line: from the start, the CIA talking points said that the violence in Benghazi was “spontaneously inspired by the protests at the U.S. Embassy in Cairo”—protests that themselves were motivated by anger over the “Innocence of Muslims” video. In addition, multiple sources reported that eyewitnesses thought the Benghazi violence was directly motivated by the video, not just indirectly via the Cairo protests. Republicans immediately tried to disparage this reporting, but not because they had any more facts than anyone else. They made an issue of it because, on the night of the attacks, Mitt Romney foolishly released a statement that falsely accused Obama of responding to Cairo and Benghazi by apologizing for the video. After that, Republicans had to circle the wagons and insist that any mention of the video was appeasement of Al Qaeda. After all, there was an election coming up, and even when your candidate does something contemptible, you have to man the barricades.