This is fairly preliminary data, but Rick Nevin reports that if current trends keep up, we’ll end 2013 with the murder rate in America at its lowest rate in over a century.

Analytically speaking, murder is an especially interesting crime because we have pretty good homicide statistics going all the way back to 1900. Most other crimes have only been tracked since about 1960. And if you look at the murder rate in the chart below (the red line), you see that it follows an odd double-hump pattern: rising in the first third of the century, reaching a peak around 1930; then declining until about 1960; then rising again, reaching a second peak around 1990. It’s been dropping ever since then.

This is the exact same pattern we see in lead ingestion among small children, offset by 21 years (the black line). Lead exposure rises in the late 1800s, during the heyday of lead paint, reaching a peak around 1910; then declines through World War II; and then begins rising again during our postwar love affair with big cars that burned high-octane leaded gasoline. Lead finally enters its final decline in the mid-70s when we begin the switch to unleaded gasoline.

This is powerful evidence in favor of the theory that lead exposure in childhood produces higher rates of violent crime in adulthood. It’s one thing to have two simple curves that match up well. That could just be a coincidence. But to have two unusual double-humped curves that match up well is highly unlikely unless there really is an association. Put that together with all the statistical evidence from other countries; plus the prospective studies that have tracked lead exposure in individual children from birth; plus the MRI scans showing the actual locations of brain damage in adults who were exposed to lead as children—put all that together and you have a pretty compelling set of evidence. Lead exposure doesn’t just lower IQs and hurt educational development. It also increases violent tendencies later in life. If we want less crime 20 years from now, the best thing we can do today is clean up the last of our lead. 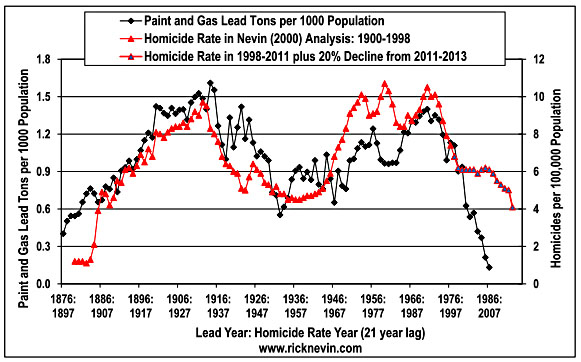