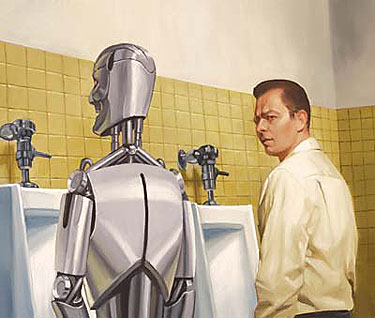 Whenever you talk about smart machines taking all our jobs, the usual pushback is that you’re being a Luddite—an argument that’s especially appropriate this year since it’s the 200th anniversary of the end of the Luddite movement. (Well, the 200th anniversary of the trial and conviction of the alleged ringleaders, anyway.) The basic argument is that all those skilled weavers in 1813 thought that power looms would put them out of jobs, but they were right only in the most limited way. In the long run, those power looms raised standards of living so much that everyone found jobs somewhere else (working in steel mills, building cars, operating power looms, etc.). So there was nothing to worry about after all.

But the Digital Revolution won’t be a rerun of the Industrial Revolution. I take a crack at explaining this in “Welcome, Robot Overlords,” and it turns out that Karl Smith was an easy sell because he already believes the same thing. Here’s his take:

Creating things is a matter of rearranging atoms. Broadly speaking, you need two things to do this — a power system to overcome the gravitational and electromagnetic forces that tend to hold atoms in their relative positions and a control system to guarantee that atoms wind up in the right place.

The industrial revolution was about one thing — more power! But, more power means the need for more control. Hence, the Industrial Revolution meant a rapid increase in the demand for human brains, not decrease.

Smart machines provide both the power system and the control system in one convenient package. You can still argue that displaced humans will end up doing something else—we just don’t know what yet—but it’s a tough argument to win. If you agree that artificial intelligence will be real someday soon, then by definition smart machines will be able to do just about anything that humans can do. The answer to “Humans will do X,” for any value of X, is “But robots can do that too.” That wasn’t true of the Industrial Revolution.

If you don’t believe that AI is around the corner, then there’s no argument to have here (aside from why you think AI is so far off). But if you do, then we have some serious questions to ponder about the future of work, the future of money, and the future of democracy. That’s what my piece is mainly about.